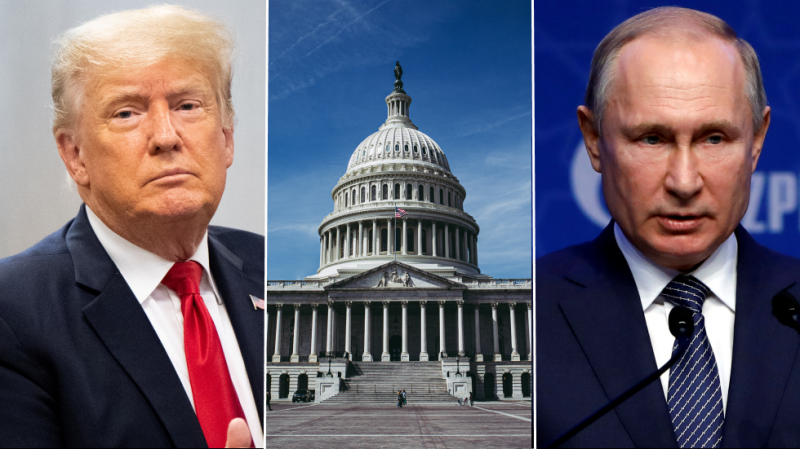 Trump-bashers will be delighted with what they find in the yarn, published this week by Foreign Affairs magazine. Formerly the senior director for European and Russian Affairs on the US National Security Council, Hill denounces her former boss for his reluctance to read his briefs, his inability to stay on script during meetings with foreign leaders, his “willingness to abuse his executive power,” his alleged authoritarianism, and his tenuous relationship with the truth. Hill is an ex-employee, but clearly not an admirer.

So much for Trump. But what did Hill think about Russia during her time in office? It was, after all, her job to advise the president on all things Russian. And here we run into a problem. For it appears that Hill’s understanding of the country and its relationship to the United States is rather strange.

A decade ago, Hill co-authored a study of Russian President Vladimir Putin entitled ‘Mr Putin: Operative in the Kremlin’. As Putin books go, it was of a better standard than many. Consequently, many Russia-watchers viewed her appointment to the White House as a positive step and hoped that it would lead to a more reasonable American policy towards Russia.

These hopes remained unfulfilled, and under Trump, relations between Washington and Moscow continued to deteriorate. One can’t blame Fiona Hill for this, since judging by her article, Trump never paid any attention to her advice. Indeed, she says that she only spoke to Trump once and he promptly ignored her. Nevertheless, her article is of interest for what it tells us about how the Washington ‘blob’ understands Russia. And it’s more than a little odd.

First, Hill likes to tell readers with great confidence what Putin is thinking and what he wants, without ever saying how she knows what’s going inside the Russian president’s head. “Putin realized that… the United States was beginning to resemble his own country,” she says, a rather strange statement since, as far as I know, Putin has never even suggested such a thing in public. “Putin recognized Trump as a type and grasped his political predilections immediately,” Hill says. Again, how does she know?

Alas, this degree of confidence about ‘What Putin Wants’ is far from unique to Hill. It’s extremely widespread. But it stands on very shaky soil. It also often contradicts what Putin has actually said. In the eyes of many commentators, Putin isn’t a politician but an empty vessel to be loaded up with malign intentions and grand plots that somehow can’t be attributed to any actual part of the Russian state.

More than that, Hill develops a very strange thesis that indirectly blames Russia for America’s internal political and social crises. This she does by suggesting that America is becoming Russia, importing from the latter all the negative elements that Hill associates with Russian life.

On the one hand, this displays an understanding of Russia founded on negative stereotypes. On the other hand, it grants Russia a degree of influence that is far beyond its actual potential.

According to Hill, after the collapse of the Soviet Union, Americans hoped that Russians would become more like them. Instead, the opposite has happened. “The United States has begun to move closer to Russia, as populism, cronyism, and corruption have sapped the strength of American democracy,” she writes.

Putin purportedly helped this process of Russianization along – which is strange, if you think about it, because allegedly he did it to undermine the US. But that implies that Putin thinks that being like Russia is a bad thing! “We are rotten – so let’s make them more like us,” seems to be the logic. One has to doubt that that’s how Putin views the world.

Again and again, though, Hill tells her readers that in doing all his terrible things, Trump was in some way aping Putin, in the process turning America into Russia. “The similarities between Trump and Putin were glaringly obvious,” she says, citing for instance “their shared manipulation and exploitation of the media,” (what ruler anywhere doesn’t try to do that?) while ignoring the fact that the then-US president spent his days glued to the TV and furiously typing out posts on Twitter, whereas his Russian counterpart doesn’t own a smartphone and apparently doesn’t even use the internet.

Both, she goes on, compiled “personal lists of enemies.” Did they? If so, they haven’t come to light – or not from the Kremlin at least. “Putin put statues of Soviet-era figures back on their pedestals,” while Trump defended Confederate statues, Hill tells us. Apart from being very different things, Putin hasn’t actually done that. Instead, he’s supported the erection of statues of the likes of pre-revolutionary Tsarist Prime Minister Pyotr Stolypin and Soviet-era anti-Communist author Aleksandr Solzhenitsyn. One has to wonder how well the president’s Russia advisor actually knew her subject.

Most boldly, Hill tells us that the January 6, 2021 assault on the Capitol building in Washington by pro-Trump demonstrators bore a remarkable similarity to Russian coups, such as that in August 1991. But the two events were, of course, completely different – the one being a mob briefly storming a government building and then leaving again, and the other being an armed coup by government officials involving the deployment of tanks and the effective detention of the head of state.

Still, Hill ploughs on. “The ‘Big Lie’ that Trump had won the election… was yet one more way in which, under Trump, the United States came to resemble Russia, where Putin has long solidified his grip on power by manipulating the Russian media, fueling nationalist grievances, and peddling conspiracy theories,” she says. As a description of Putin’s methods of government, it’s a bit simplistic.

This week, the RAND Corporation published an analysis of what motivates Russian military interventions beyond Russia’s borders. Among other things, the report concludes that there is no evidence to support the claim that such interventions are designed to detract popular attention from internal problems. Nevertheless, Hill tells us that “Putin blurs the line between domestic and foreign policy to distract the Russian population from the distortions and deficiencies of his rule.” Again, it’s a claim that seems to contradict reality.

Overall, Hill’s thesis fails to convince. Her vision of Russia and of Vladimir Putin comes across as rather unsophisticated and one-sided, and often contrary to the evidence. Furthermore, if America is suffering from deep internal divisions, it has nothing to do with Russia. Nor does it mean that it is becoming like Russia. America’s problems are almost entirely of its own making. Fiona Hill complains that Donald Trump didn’t listen to her. Perhaps he was right.