Welcome to the Big Tech Sweepstakes, where BLM looters win corporate prizes, and Capitol Hill rioters get the boot! 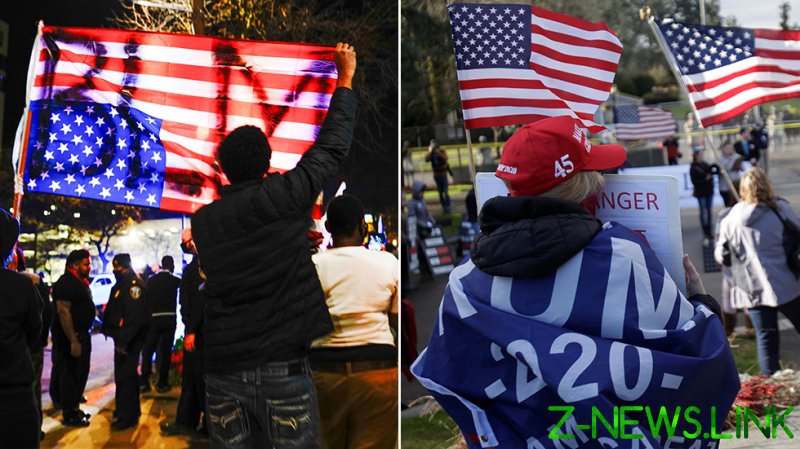 Hello and thank you for participating in the Big Tech Sweepstakes, where your political movement could win the approval of the mighty corporations that now dominate your lives! Isn’t democracy great? Oh look, we have a contestant! Could you please state your name, sir, and tell us a little bit about yourself?

BLM: Hi, sure, my name is Black Lives Matter, but my friends call me BLM. I am a social justice movement that first appeared in 2013 after the acquittal of George Zimmerman in the murder of the black teenager Trayvon Martin. But my real claim to fame came with the nationwide protests that began in May 2020 with the death of George Floyd, a black man, who was killed during an arrest by a racist white cop.

And are you certain the cop was a racist? I mean, isn’t it possible the officer was just poorly trained to responsibly carry out his duties?

BLM: Hello? As I said, he was white. And, as critical race theory teaches, racism is practically a genetic trait of all white people. Their inherent sense of privilege and superiority, cultivated for a long time without resistance, has led to the oppression of minorities throughout history. This makes all white people complicit in the rise of white supremacy, the scourge of our times. Now it’s our duty to let white folks out of their racist closets, so to speak.

I see. That’s very moving and inspirational! Is there anything else that has motivated you to speak out on this momentous issue?

BLM: Well, as you might imagine, such a movement could never get off the ground without cash, boatloads of it. And with the help of some very generous philanthropy, not least of all from George Soros, I was able to organize a worldwide movement against the systemic racism that is gnawing away at the soul of America. Today, we even have entire sports teams taking the knee during the national anthem, for example, as well as massive corporate sponsorship to protest against racist police.

Well, that is certainly awe-inspiring and very liberal! Okay, just a minute, we have another contestant here. Please, tell us your name and a little bit about yourself.

Oh dear, that’s too bad. Hey, wait! Aren’t you the guy who just ransacked the Capitol building in Washington, DC during the Electoral College vote count?

ATV: Well, I didn’t exactly ransack the place. Please understand that emotions were running high and the police presence wasn’t exactly what it should have been. In any case, I have been ignored and ridiculed by the media for four long years and, to be honest, I am sick and tired of it. So one thing led to another and before I knew it, the police were waving me into the complex.

BLM: Excuse me, if I may interrupt for just a moment.

Sure, go ahead, BLM.

BLM: Angry Trump Voter, what you did in the capital of our great nation was truly disgusting and despicable. You and your deplorable racist rabble defiled the very heart of our democracy. You deserve everything you get for that unforgivable crime!

ATV: Well, BLM, aren’t you one to talk about defiling our country! It takes a special kind of hypocrite to burn the American flag, kneel during the American anthem and pull down statues of the American founders. And now you feign horror as Trump supporters dare to take an unscheduled tour of the Capitol Building during working hours? How quickly everyone forgets that just months ago, you were looting and burning a swath across the country, forcing people by threat of physical violence to declare their support of the BLM cause. Most Americans are not racist, you know.

Gentlemen, please! If we can just calm down and discuss this calmly and rationally…

BLM: We are fighting for a just cause! The noblest of them all, the equality of all men! But you, Angry Trump Voter, have desecrated the holiest of the holies, the very seat of our representative government!

ATV: First, BLM, we are not racists. The media will never tell you that more black people joined the Republican Party under Donald Trump than under any other conservative presidency in recent history. And yes, it is true that I entered the Capitol building, and perhaps that was unwise. But I did not loot or commit arson or declare a ‘self-autonomous zone’ like you did in Seattle alongside your radical Antifa buddies. Unfortunately, some people lost their lives, but far more people died over the course of the BLM riots, with far more physical damage sustained. And let’s not forget that you too, BLM, attacked federal property, particularly the Portland courthouse, where you engaged in violence against federal troops!

BLM: Dear misguided Angry Trump Voter, I’ll have you know that BLM engaged in mostly peaceful protests, and even CNN supports that claim. But you looted from the Capitol building and behaved outrageously! Why, you put your feet up on Nancy Pelosi’s desk inside of her private office and even swiped her laptop!

Wait a second. You put your feet on the desk of the Speaker of the House?

ATV: Well, it was just for a selfie. I couldn’t resist. In any case, aside from the speaker’s podium, and a few other souvenirs, yes, I took Miss Pelosi’s laptop.

BLM: That is truly disgusting behavior, Angry Trump Voter. I am mortified and repulsed! Please, enlighten me. What is this strange fascination that you Trump people have with laptops anyways? First it was Hillary Clinton’s laptop, and then it was Hunter Biden’s. Now, you admit to stealing Nancy Pelosi’s laptop! You act like common street thugs!

ATV: Well, BLM, did you really expect me to waltz out of the Capitol building with nothing more than widescreen TVs and Nike sneakers like you and Antifa have a habit of doing during your looting sprees? And let’s face it, who knows what unsavory surprises one may find on a laptop.

Oh, I have heard enough. This is unspeakable. To sneak a peek into a person’s laptop is no better than rifling through their underwear drawer. There are some lines that must not be crossed, sir!

ATV: Big Tech, you are employing cheap hyperbole, hypocrisy and theatrics, just like everyone else on the left. For four years, Angry Trump Voter has been subjected to endless media-fueled conspiracy theories – debunked hoaxes like Russiagate and impeachment – and now you want to ignore any discussions about the possibility that the elections of November 3 were rigged in favor of Joe Biden. You want to play judge, jury and executioner based on your personal political beliefs, and then you wonder why a throng of people showed up in Washington, DC demanding attention. Big Tech, you are not an impartial arbitrator!

Angry Trump Voter, I am very sorry, but I have heard more than enough of this nonsense. By the power invested in me, I have no other choice but to terminate your physical presence and the presence of your rascally leader, Donald J. Trump, from all social media platforms. You are a menace to society and a threat to yourself.

ATV: What!? You can’t just shut down the voices of 75 million Americans! They will never stand for it!

I’m sorry, it’s already been done. Oh, and please don’t hate me. Understand that I am working in your best interest. I am merely protecting you from yourself! Otherwise, at the encouragement of your reckless leader, you may go out and do something outrageous again.

ATV: This is an outrage! We have behaved no worse than BLM or Antifa! We will defeat you! We will smash your monopolistic grip on free speech! We have a constitution!

Guards, please, remove this angry man from my sight! Such unacceptable behavior! BLM, I apologize that you had to witness such an unsightly scene. You win today’s Sweepstakes and will get millions more in corporate support. And hopefully with Joe Biden as president we can finally look forward to an age of peace and unity in the United States.