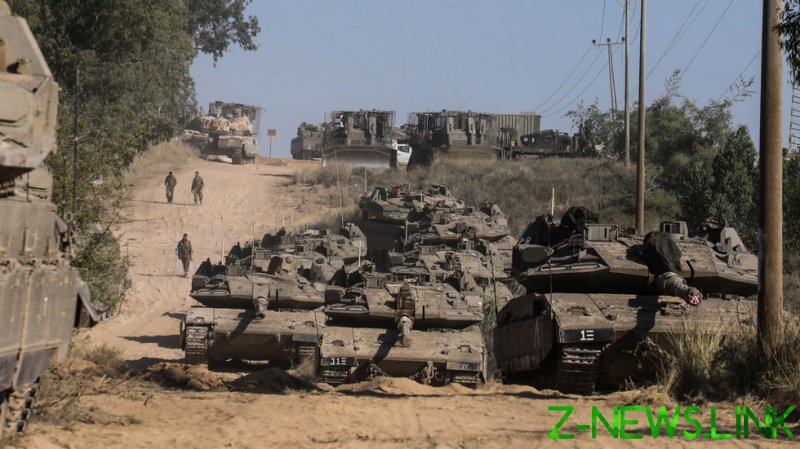 Shortly after midnight on Friday, Israel Defense Forces (IDF) tweeted that “air and ground troops are currently attacking in the Gaza Strip.” This led a number of outlets – such as the New York Times, the Wall Street Journal, AFP and NPR –  to report that Israeli soldiers have actually entered the Palestinian-controlled territory, from which Hamas and Islamic Jihad militants had been launching rockets over the past week. Here’s the Washington Post, for example:

Two hours later, however, the IDF issued a “clarification”: there were no ground troops in Gaza, and never had been.

Officially, the confusion was due to “internal miscommunication,” IDF spokesman Lieutenant Colonel Jonathan Conricus told reporters on Friday. “These things can sometimes happen in the midst of a complex operation with many moving parts and with an unclear picture of what was happening,” he said. “As soon as I understood that I had the wrong information, I updated the relevant people with a clarification.”

Or Heller, a military correspondent for Israel’s Channel 13, says otherwise. “It was a manipulation. It was smart and it was successful,” he said, according to AP. “What we saw tonight was a very sophisticated operation that had a media aspect to it.”

According to Heller, the reports led Hamas fighters to make for the underground tunnels that Israelis call “the Metro,” from which they hoped to emerge and ambush the invaders. The IDF used 160 airplanes and artillery to target the tunnels, bombing them for around 40 minutes – and apparently inflicting heavy casualties on the militants.

During a conference call with a number of outlets on Friday, Conricus reportedly said there was no attempt “to try to fool anybody or to cause you to write anything that isn’t true,” adding that he “can understand that it may look differently.”

He did admit the IDF was trying to deceive Hamas with tactics like massing armor near the border with Gaza. The “target audience” of that wasn’t the press but “hopefully the dead terrorists that are now lying inside the tunnel,” he said.

“What the IDF wanted to create was a situation where they went down into the tunnels so that we could attack them,” he said. The twist? His quote came from an off-the-record call, a recording of which was obtained by the New York Times from another outlet.

What’s interesting is that outlets that relied on IDF’s tweet verbatim – rather than Conricus – did not jump to conclusions, but reported that Israeli tanks and artillery began striking Gaza alongside the drones and jets already used in the conflict.

For example, RT’s Paula Slier reported that artillery units from Israel’s Golani Brigade were “shooting into Gaza from the border, but have not crossed over.”

Reporters who asked Conricus, however, were told otherwise. Wall Street Journal’s Felicia Schwartz tweeted that the colonel told her directly “there are ground troops in Gaza” before retracting that – two hours later.

It wasn’t just Western media that misreported the story. Judah Ari Gross of the Times of Israel said he was “told unambiguously that Israeli troops had entered the Strip, despite this not being the case.”

“Yes. As it’s written in the statement: Indeed, ground forces are attacking in Gaza. That is that they are in the Strip,” Gross said Conricus had told him.

Weaponizing information is hardly a novelty. “All warfare is based on deception,” ancient Chinese strategist Sun Tzu wrote 2,500 years ago. In these times of ‘5G’ warfare that’s mainly psychological, fake news is intended to disarm the adversary mentally before any shots are fired, to ensure they aren’t to begin with.

Apparently, this kind of media manipulation has a role to play even once the shooting starts. If the IDF really deliberately misinformed reporters, foreign and domestic, about its activities in Gaza in order to trick Hamas into a trap – as Heller claims and outlets like Jerusalem Post suggest may have happened, that means war reporters caught on the “kinetic” battlefield have one more headache to worry about.