We will not allow Iran to obtain nuclear capability, PM Netanyahu says as Tehran blames Israel for Natanz plant attack 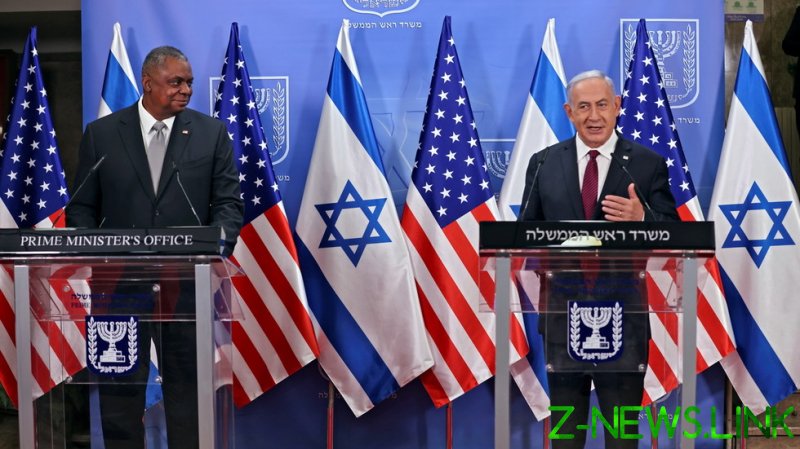 Without directly mentioning the incident in Iran, Netanyahu spared no words to admonish Tehran, calling it the biggest threat Israel faces in the Middle East.

“Iran has never given up its quest for nuclear weapons and missiles to deliver them. And Iran consistently and outrageously calls for Israel’s annihilation and works toward that goal,” the Israeli leader said.

Netanyahu was speaking to the press alongside visiting US Secretary of Defense Lloyd Austin, who assured his host of Washington’s unwavering support in maintaining Israeli military supremacy in the Middle East. Both officials brought up Yom HaShoah, the Israeli Holocaust Remembrance Day that was observed earlier in April.

On Sunday, Iran reported a power outage incident at its uranium enrichment facility in Natanz, blaming it on Israel. Israeli and US media said its sources confirmed that it was the result of a clandestine operation carried out by the Israeli intelligence agency Mossad. An offensive cyber operation has caused an explosion at the plant’s on-site power generation equipment, the media claimed. Iran didn’t offer details about the damage at Natanz.

Iranian Foreign Minister Javad Zarif claimed the alleged act of sabotage was meant to undermine EU-mediated talks in Vienna, where the US and Iran are trying to find a way to salvage the 2015 nuclear agreement between Iran and major world powers. The deal was meant to prevent Iran from reaching a point, from which it could rush toward producing a nuclear weapon. Tehran denied ever having a nuclear military program, but accepted restrictions on its nuclear industry in exchange for the lifting of international sanctions and other benefits.

Israel vocally objected to the deal-in-the-making, but failed to derail its sealing under the Obama administration. Donald Trump sided with Israel on the issue and withdrew from the agreement, known as the JCPOA, in 2018, as part of his policy of pressuring Iran with crippling economic sanctions.

Tehran started reneging on its commitments under the agreement a year later, trying to leverage the European signatories into helping it defeat unilateral US sanctions. The talks in Vienna are meant to steer both the US and Iran back into compliance with the JCPOA.

Iran, formerly an Israeli ally under the US-backed rule of Shah Mohammad Reza, has been hostile toward the Jewish state since the 1979 Islamic Revolution. It considers the Israeli government an illegal “Zionist regime” occupying territories that rightfully belong to the Palestinian people.

The two nations have been engaged in a protracted proxy war in Syria and elsewhere.