Home / WORLD / ‘We want justice under US law,’ father of 2yo daughter killed in Kabul drone strike tells RT 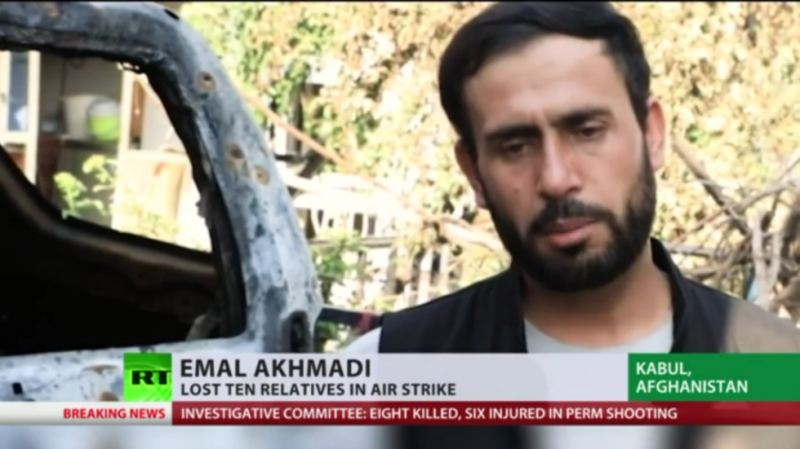 Emal Akhmadi lost 10 family members, including his two-year-old daughter Malika and brother Zemari, on August 29, when a US Reaper drone destroyed a car in a busy neighborhood not far from Kabul’s Hamid Karzai International Airport.

The Pentagon initially claimed the airstrike had killed a terrorist – only to admit two weeks later that it had targeted the wrong person. The surviving relatives, meanwhile, are still shaken by the tragedy.

“No one can compensate us. If you give us all the money in the world, it will not be enough. It’s not possible. They can’t compensate for the murder of a child, and there is no remedy for this loss,” Akhmadi told RT’s Murad Gazdiev.

We are grieving, heartbroken. Our family was innocent. We knew that we didn’t do anything wrong.

For more than a decade, Akhmadi’s brother Zemari worked as an electrical engineer for Nutrition and Education International, a California-based aid group. The head of the group’s office in Kabul told the New York Times that Zemari was driving to pick up a laptop from work when he was killed.

Just three days before the fateful drone strike, a suicide bomber killed 13 American soldiers and more than 160 Afghan civilians outside the packed airport, as Western countries were frantically evacuating their nationals and local helpers. Islamic State Khorasan Province (ISIS-K), an Islamic State (IS, formerly ISIS) affiliate in Afghanistan, took responsibility for the attack.

Facing sharp criticism at home, President Joe Biden was pressured to show strength with a quick retaliation. The US Air Force first hit what they said was an ISIS-K target in Afghanistan’s eastern Nangarhar Province, and then deployed a combat drone to Kabul.

US Central Command spokesperson Captain Bill Urban said at the time that the drone took out “an imminent ISIS-K threat” to the airport, and the destroyed car was rigged with explosives.

Akhmadi was “shocked” to hear how his family was mistaken for terrorists. “After they confessed that it was a mistake, we wondered why they didn’t check before attacking us. Why didn’t they find conclusive intelligence? They should’ve made sure by carrying out a thorough investigation before accusing and attacking us.”

CNN cited sources this week saying that the CIA actually warned the Pentagon about possible civilians in the area, including children inside the vehicle. But the warning reportedly came just seconds before a Hellfire missile hit the car.

On Friday, General Frank McKenzie, the head of the US Central Command, called the death of civilians “a tragic mistake” and formally apologized. He acknowledged that the victims likely had no ties to terrorists.

Akhmadi told RT no one has reached out to the family on behalf of the US government. He personally cannot forgive the death of his loved ones, and wants those responsible to be brought to “justice according to American law.”

The person who pulled the trigger and those who gave the fire command should stand before a court of law. We need assurance that next time they will not kill innocent people and children in other countries. The culprits must be convicted.

“Then we will accept reparations according to American law,” Akhmadi said.

The last American troops left Afghanistan on August 30, bringing almost two decades of Western occupation to an end. The US led the invasion into the country in 2001 after Washington launched a global campaign against Islamic terrorism following the 9/11 attacks.

Initially, the NATO forces managed to quickly eject the Taliban militants from large cities, but the protracted insurgency and guerrilla warfare dragged on, making the campaign in Afghanistan the longest war in US history.

As the US was withdrawing its troops, the Taliban recaptured almost the entire country in a matter of weeks, overrunning provincial centers and entering Kabul with little to no resistance on August 15.