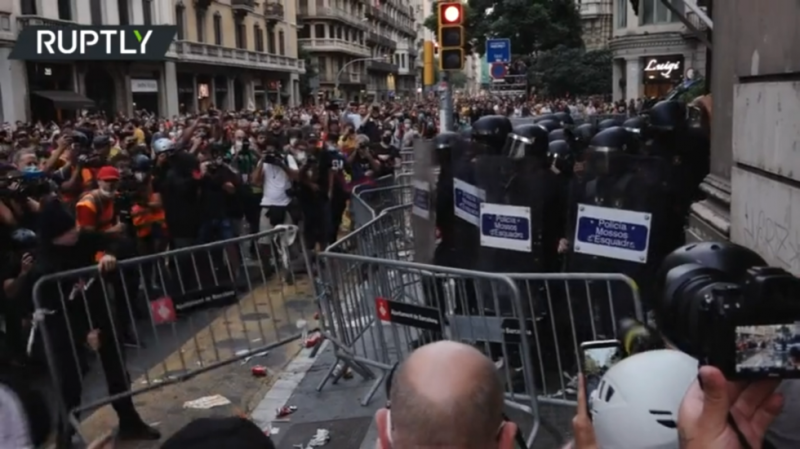 People hurled plastic bottles, toilet paper rolls and other objects at officers outside Catalonia’s police headquarters in Barcelona. They also pushed and threw metal fences towards the police. In one instance, officers were sprayed with a fire extinguisher.

Protesters carried Catalan flags, shouting “We want independence now” and “Out with occupation forces,” with some calling for civil disobedience.

A group of black-clad and masked activists was filmed burning photos of Spanish Prime Minister Pedro Sanchez and Pere Aragones, the head of Catalonia’s regional government, who independence activists accuse of a defeatist attitude towards Madrid. The flags of Spain and the EU were torched as well, according to the Spanish media.

In 2017, more than 90% of Catalonia’s voters backed independence from Spain in a referendum with a turnout of 43%. Spanish authorities argued that the referendum itself was illegal and its result void.

A group of high-profile Catalan politicians and officials was later found guilty of sedition and jailed for organizing the vote and proclaiming Catalonia’s independence, while several others fled the country.

The region’s parliament was dissolved and Spain directly ruled Catalonia until a new government was set up in 2018. In June, the Spanish government pardoned nine imprisoned Catalans.

The prosecution of the Catalan politicians sparked protests, as did their eventual pardon.