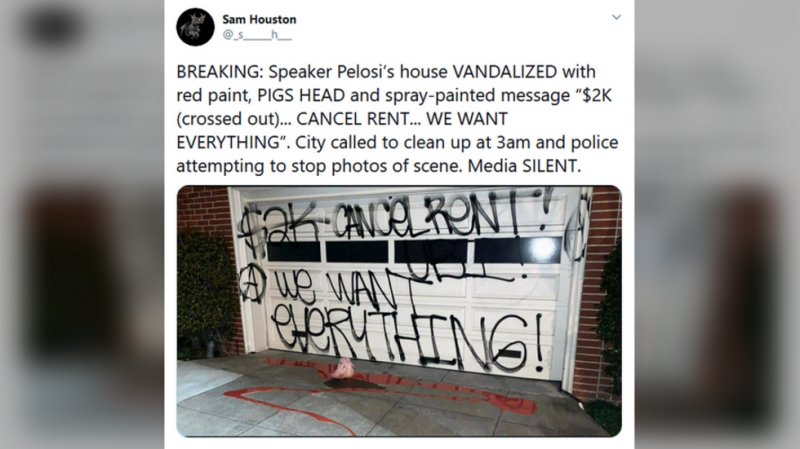 The incident, first reported by TMZ on Friday, saw vandals using black paint to cover what is said to be Pelosi’s garage door in San Francisco with graffiti. The drawings invoke the proposed $2,000 stimulus check that failed to pass in Congress despite President Donald Trump’s vocal support for the measure.

The other slogans read “cancel rent” and “we want everything.” The peculiar scene also featured a pig’s head and fake blood smeared all over the ground at the garage’s door.

Citing police sources, TMZ reported that officers responded to a call at Pelosi’s house at around 3 am in the early hours of New Year’s Day.

“Dems like Pelosi will learn sooner or later: you cannot appease the violent left,” Dennis wrote.

Pelosi has been one of the proponents of raising the stimulus check from $600 to $2,000, accusing Senate Majority Leader Mitch McConnell (R-Ky.) of delaying the vote on the House-passed bill that greenlit the increase.

McConnell, who said that he sees “no realistic path” for the legislation to pass in the Senate, has in his turn become the target of incendiary rhetoric from the left, including, most recently, from a Virginia ‘school teacher of the year.’ Rodney Robinson, named National Teacher of the Year in 2019, was forced to apologize earlier this week after inciting an attack on McConnell after he “jokingly” suggested the Senator’s neighbor should assault him for his favored policy.