Home / WORLD / ‘We tried everything’: De Bruyne despair after Italy edge Belgium out of Euro 2020 via Lukaku penalty and spurned sitter (VIDEO)

‘We tried everything’: De Bruyne despair after Italy edge Belgium out of Euro 2020 via Lukaku penalty and spurned sitter (VIDEO) 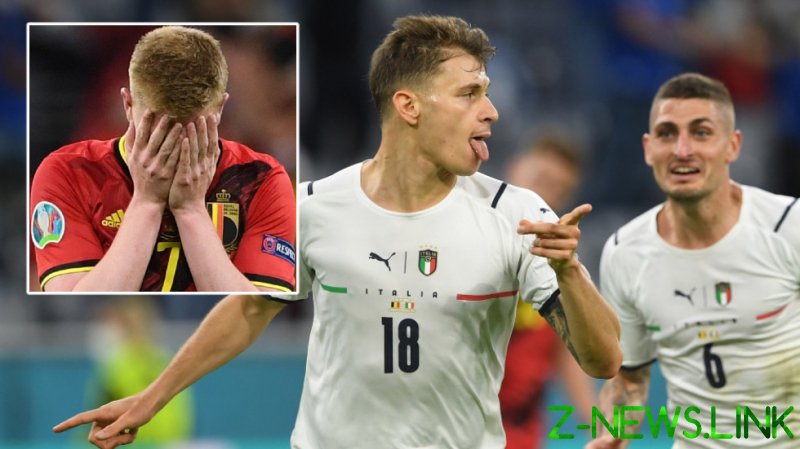 In one of the most hotly-anticipated and high-quality tussles of the tournament so far, Italy took the lead shortly after the half-hour mark when Nicolo Barella curled in an emphatic opener, seizing on the rebound following a spell of pressure inside the Red Devils’ penalty area.

Moments of class were always likely to settle an encounter between two of the best sides in the world, and an end-to-end battle swung firmly in Italy’s direction when Lorenzo Insigne gave Thibaut Courtois no chance with a long-range strike, fizzing a spectacular effort beyond the goalkeeper’s grasp and into the top left-hand corner of his net.

Never to be discounted, Romelu Lukaku – a hero to many in Italy after his prolific goalscoring exploits for Inter Milan on their way to the Serie A title last season – outwitted goalkeeper Gianluigi Donnarumma from the penalty spot, shooting straight down the middle after teenager Jeremy Doku had been nudged in the back by Giovanni Di Lorenzo inside the penalty area just before the break.

The finest of margins made the difference in a tense, tight and immensely entertaining second half. Lukaku should have scored after 61 minutes, shooting at Leonardo Spinazzola with a free sight of goal at the far post after Kevin de Bruyne had found him with a perceptive cross from the left.

Rampaging full-back Spinazzola could also have done better when Insigne located him unmarked inside the penalty area five minutes later, but Italy would not rue that miss.

Extending their unbeaten run to a remarkable 32 matches, the Azzurri held out to eliminate the number one-ranked team in the world, setting up an unmissable meeting with Spain at Wembley on Tuesday.

“It really could have gone either way, but Italy deserved to win here,” conceded a crestfallen Courtois after Belgium’s hopes of glory were snuffed out.

“This hits hard but we knew it was going to be a tough game. We had two opportunities but their keeper made a good save and I think we gave the first goal away a bit to easily.”

Manchester City and Belgium maestro Kevin de Bruyne refused to discredit his team’s effort. “We tried everything to win that match,” he said.

“They scored a fantastic goal, but the first one may have been a mistake on our part. They had more possession and the ball didn’t go in for us, which is a shame.”

Italy coach Roberto Mancini did not seem to believe that his side had been pushed too close. “I don’t think we suffered too much in any moment of the game,” he suggested.

“To beat a team like Belgium, you need a great performance by everybody and this is exactly what happened today.

“We scored two and could have scored more. I think the victory is fully deserved.

“Spain are next but the more you go forward, the most difficult it becomes. Tonight, however, we just want to think about our performance and our victory.”

Donnarumma was particularly proud of a save he made from De Bruyne. “I still have to watch that save back, but we are here just to give our best and give Italians joy,” said the stopper.

“We won as a team; this is an extraordinary group.”