Home / WORLD / ‘We the People’ gone and no one noticed: Biden removes Obama-era petition tool to thunderous media silence

‘We the People’ gone and no one noticed: Biden removes Obama-era petition tool to thunderous media silence 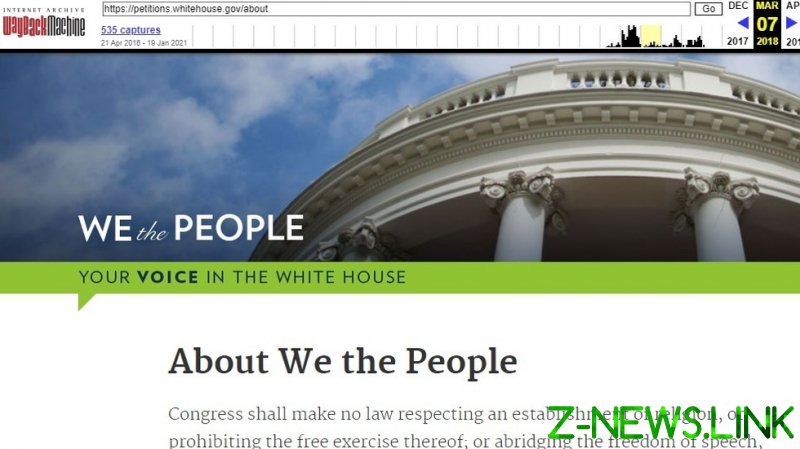 All links to ‘We the People,’ the petition page launched out by the Obama administration in 2011, now redirect to the main White House website. Neither the ‘Contact’ nor ‘Get Involved’ links, which used to lead to it, do so anymore. Apparently, this has been the case since January 20, when the Biden administration took over both the White House and its website.

Yet for the past four weeks, not a single mainstream media outlet has noticed its disappearance. It was pointed out on Monday by Eric Garris, webmaster for the libertarian website Antiwar.com.

This total lack of interest in the petition site stands out in comparison to the media reaction when the Trump administration took it offline in December 2017. One report after another suggested this was done because the three most popular petitions on the site demanded Trump release his tax returns, divest of his business holdings, or resign outright – all initiatives launched by Democrats and the anti-Trump “resistance.”

Once the page was restored in early February 2018, and the Trump White House began responding to the petitions, the media quickly lost interest. Fast forward to January 2021 and the outright removal of the petitions page didn’t even register on their radar.

Instead, they were too busy praising Biden for not being Trump and undoing everything the previous administration has done as quickly as he could sign executive orders. Even when directly affected by the administration’s actions – such as when deputy White House press secretary TJ Ducklo threatened a reporter on Inauguration Day – the media seemed content to keep it quiet for weeks.

The White House first suspended Ducklo for a week, but he ended up resigning over the scandal the following day. Even as that unfolded, however, the media quickly shifted their attention to the feel-good story of the weekend, gushing over the Bidens’ lawn decorations for Valentine’s Day instead.

While the contrast between the way the press have treated Biden and Trump is old news at this point, it’s downright puzzling that no one has raised the issue of the petition page as dismantling the legacy of another media darling, Barack Obama.

Launched in September 2011, ‘We the People’ was one of the Obama administration’s experiments in digital democracy, with the White House obligated to respond if a petition reached 100,000 signatures within 30 days. It ended up falling out of favor by the end of the Obama years, as Americans actually played by the rules and sought to compel a response to such thorny issues as persecution of WikiLeaks publisher Julian Assange.

Biden was Obama’s vice-president for eight years, and campaigned on that legacy – insofar as he campaigned at all.