Home / WORLD / ‘We should not forget who started this stage of war’: Armenian president on Nagorno-Karabakh conflict in exclusive RT interview

‘We should not forget who started this stage of war’: Armenian president on Nagorno-Karabakh conflict in exclusive RT interview 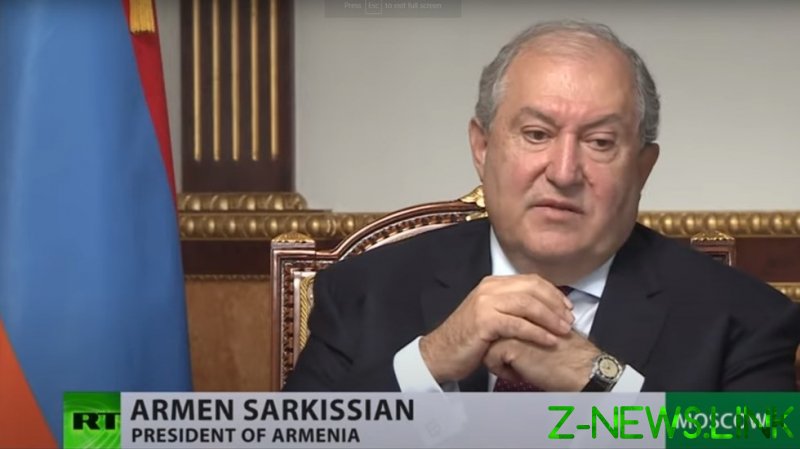 “We should not forget… who started this stage of war. It was the Azeri side, not the people of Nagorno-Karabakh,” Sarkissian told RT’s Ilya Petrenko in an interview.

Inhabited mostly by ethnic Armenians, Nagorno-Karabakh seceded from Azerbaijan in 1991 and declared itself an independent republic after the 1994 armistice. The government in Baku maintains that the region is an “occupied territory” and demands its return.

The conflict frozen for 26 years erupted again on September 27, with both sides blaming the other for starting it. Hundreds of people were killed before Moscow brokered a ceasefire that was scheduled to go into effect on October 10.

Sarkissian did not deny there were violations of the October 10 ceasefire from the Armenian side, saying they were provoked by Azerbaijan’s initial violations – a claim that Baku denies. Sarkissian, however, insisted that it was not Armenia who shelled Ganja.

“I’ve clear information from my government, from Ministry of Defense and Foreign Ministry… that it’s definitely not Armenia that has shelled it,” Sarkissian told RT. He also noted that Stepanakert, the capital of Nagorno-Karabakh, was shelled on Saturday just after the ceasefire went into effect.

Fighting has also continued in Hadrut, on the southern side of Nagorno-Karabakh. A RT crew was caught in the shelling on Monday.

Meanwhile, Azerbaijani President Ilham Aliyev insisted that all talks on solving the crisis should be between Baku and Yerevan directly, without what he called the “puppet regime” in Nagorno-Karabakh, and that there can be no discussion on whether the “occupied territories” should be returned to Azerbaijan, only when.

In an interview with the Moscow daily RBK, Aliyev also said that Armenian Prime Minister Nikol Pashinyan should thank Russian President Vladimir Putin for “saving” him from defeat.

“When Pashinyan gave us an ultimatum, when he offended the feelings of Azerbaijanis, he deserved to be punished for it. And we did so.” Aliyev said. “He should thank Putin for the fact that once again, Russia came to Armenia’s rescue.”

The full interview with the Armenian president will air on RT at 10:30 Moscow time (0730 GMT) on Tuesday.