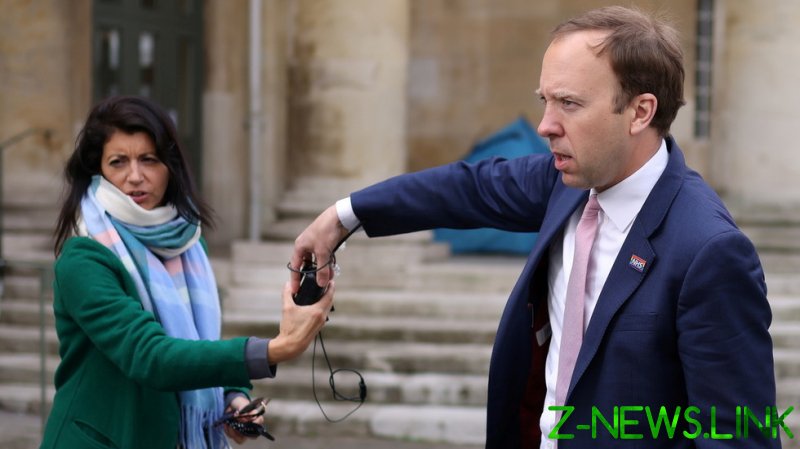 Hancock resigned as health secretary earlier this week after a leaked photograph showed him snogging aide Gina Coladangelo, a married lobbyist who he had promoted to a paid position last year. The kiss was seen as a breach of his own social-distancing guidelines, not to mention his marital vows.

But there is growing suspicion that Hancock may have engaged in unlawful activity by giving Coladangelo a government salary. Labour has demanded all documents related to her recruitment for her £15,000-a-year job with the Health Department. Her role reportedly entailed 15-20 days of work each week. Her responsibilities included, in part, “to act in an independent manner bringing expertise, scrutiny and challenge” to the department.

There are concerns that her romantic relationship with Hancock may have influenced the decision to give her the position. However, Buckland appears to think otherwise. Speaking to Sky News, the justice secretary said that he was “confident” that “due process” had been followed in Coladangelo’s appointment.

“Everything that I understand so far leads me to believe due process was followed in the appointment of this person and any declarations that should’ve been made were made,” Buckland said, adding that he had information which “suggests” that all procedures had been followed during her hiring.

Although confident that her hiring was by the book, the justice secretary conceded that he was not sure when Hancock and Coladangelo’s relationship began.

He noted, however, that there was an “understandable groundswell of concern” surrounding Hancock’s actions and that the former health secretary was right to resign.

But when pressed to comment on what would happen if it was found that Hancock hadn’t been forthcoming about Coladangelo’s appointment, Buckland struggled to answer.

“Well, you should know,” she fired back.

He later clarified, saying that if misleading declarations were made about the hiring process, it would be “highly irregular and inappropriate.”

Observers on social media were less than thrilled by the justice secretary’s utterances.

“We need a new government,” quipped one Brit on Twitter.

Others accused the government of being more concerned about how Hancock got caught snogging his aide than with whether he broke any laws.

One comment argued that it was clear that Buckland was either “incompetent” or “complicit” in the scandal.

The justice secretary has previously defended Hancock from serious allegations of wrongdoing. In February, Hancock was found by a high-court judge to have acted unlawfully by failing to publish large Covid-related government contracts within 30 days, as stipulated by law. Buckland argued that Hancock’s unlawful behavior was forgivable because “getting something wrong is not the same as deliberately flouting the law”.