‘We might be doing something wrong,’ Carnegie think tank VP says about Rolls-Royce sales hitting all-time high in Russia 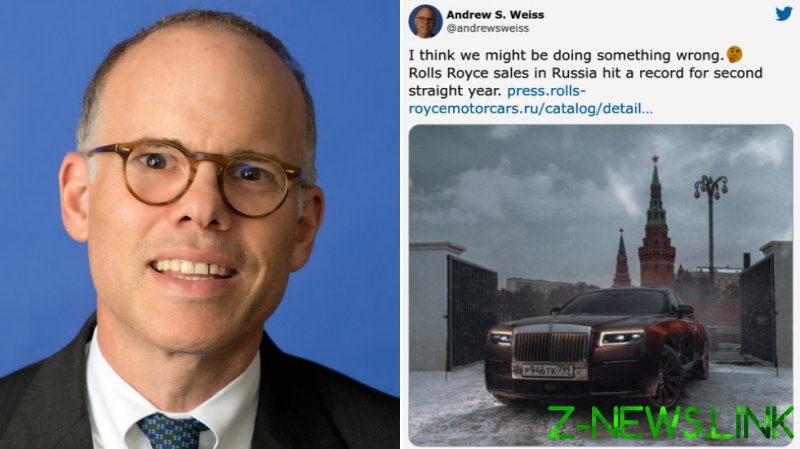 The UK-based automaker celebrated its best-ever year on the Russian market, reporting last month that in 2020 it managed to beat the previous year’s record and delivered over 200 cars to Russian clients. Russia “has cemented its status of being the largest market for the brand on continental Europe,” it reported.

One posh car producer’s good news is another think-tank official’s bad news. Andrew Weiss, vice president for studies at the Carnegie Endowment for International Peace (CEIP), remarked on Monday that the news meant that “we might be doing something wrong.”

Weiss “oversees research in Washington and Moscow on Russia and Eurasia” for the think tank, having taken the job after working in a Russia-focused capacity for the RAND Corporation, according to his bio on the CEIP website. Previously he served as an adviser to Presidents George H. W. Bush and Bill Clinton. The influential foreign policy think tank itself has over a century of history under its proverbial belt, though its Moscow branch was ‘only’ opened in 1994.

The senior CEIP official didn’t explain what exactly saddened him in the fact that Russia had an abundance of wealthy individuals who can afford forking out, for instance, $370,000 for a brand-new Rolls-Royce Wraith. Presumably he meant that the stated policy of Western countries to punish Russian elites for backing its government has been a failure – at least in terms of punishing their motor fleets.

The well-to-do in Russia seem to be going along the same trajectory as their Western counterparts – becoming richer despite the Covid-19 pandemic – further aggravating an already serious problem with economic inequality. But the Rolls-Royce bottom line indicates that the Russian economy is nowhere near to being in tatters due to years of Western sanctions and other hardships.