Home / WORLD / We lost, get over it. Dominic Raab is correct, now is the time to engage with the Taliban

We lost, get over it. Dominic Raab is correct, now is the time to engage with the Taliban 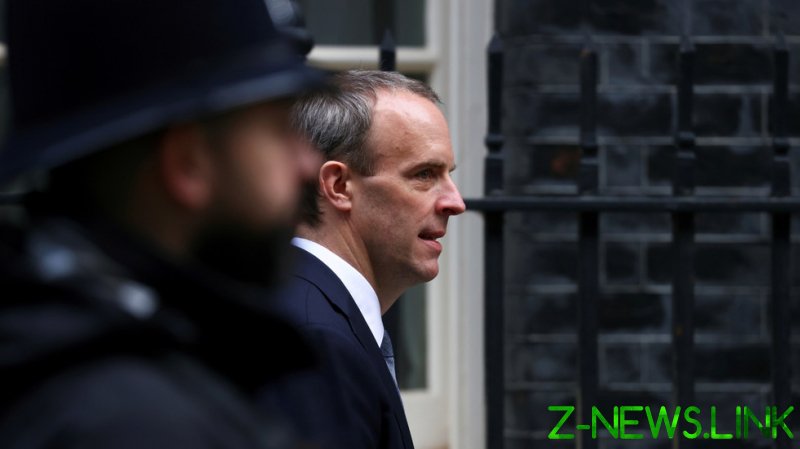 Those of us who have worked for the international community’s efforts in Afghanistan, whether as soldiers, civilian advisers, or NGOs, had one abiding nightmare.

That was being captured by the Taliban. Most of us had watched some of the brutal snuff movies from their first reign in the 1990s. We knew from the experiences of our own forces and some civilians who had been captured what our fate was likely to be: agonising torture, before having our heads cut off and footage posted on the internet. With our murderers wearing black masks and shouting “Allahu Akbar.”

It was the stuff of our nightmares, and it led many of those who went out on the ground to swear to their colleagues that if the worst came to the worst, “no one gets left behind, fight to the death.” There were some instances of NATO forces doing just that.

We had all heard the stories of women being accused of adultery being stoned to death, or of musicians having their fingers cut off, as part of the Taliban’s savage interpretation of Sharia law.

But we also had either seen the evidence – or heard the tales – of the robbery and extortion of the people of Afghanistan by government officials and soldiers, to say nothing of the abduction of young boys to be used as sex slaves by the police. They would be kept in little cages for the gratification of police chiefs in the time-honoured Afghan traditional practice of bacha bazi. And shamefully, we – myself included – turned a blind eye to all this and quietly went about our business of trying to help some of these beasts in government uniforms beat the Taliban.

We also knew that the leaders we were risking our lives to support – the Afghan government ministers and officials, the army generals and the police chiefs – were, for the most part, utterly corrupt and equally as brutal as their Taliban opponents. I personally would put no deception, or act of gender abuse or violence, past them. And these were supposed to be the good guys. Or were they?

In the rural areas, many Afghans trusted the Taliban to dispense justice. For the most part it may have been harsh, but unlike the government judges, you couldn’t buy it. That’s why, in the end, the Taliban won.

It is also why so many very brave Afghan soldiers and special forces gave up fighting. They knew they would be propping up a deeply corrupt and self-serving government.

So where are we now? For the most part, those in Western governments and militaries are deeply shocked and embarrassed that a group of poorly equipped turban-wearing militants has sent us out of the country with egg on our faces.

Our media, particularly the more ‘woke’ outlets, relish relating tales of the potential abuse of women, the loss of education for girls, and the brutalities of Sharia law under Taliban rule. Most are so naive that they have no idea how bad the US-backed government and their forces were to the people in general, and to women in particular; rape by their colleagues was an occupational risk for any brave Afghan girl foolish enough to believe our hype and join the police as we strove to meet targets for the number of female police officers.

This was driven by the gender lobbies in the Western democracies and enforced by the gender Nazis in the various embassies allocating funds to those of us trying to build the security forces. I had to personally intervene at ministry level on behalf of violated policewomen, seeking justice on their behalf of them and the international donors, only to be met by platitudes and bluffs from senior Afghan officials.

As a specialist in rape allegations, I can say that what I was told the Afghan authorities were doing to deal with this wholesale criminal abuse was utter nonsense. Yet we, the international community, still did nothing.

All of this tells me that the Taliban may not be a whole lot worse than what we built up and propped up for 20 years. They may even be better. At least they appear to have some principles, if you don’t count having Donald Trump over with the so-called peace agreement and don’t read too much into some of the cruel punishments being meted out.

After all, remember that even some of the most senior members of the previous government had a reputation for savage brutality themselves. The former number three, Marshal Dostum, a Northern Alliance warlord, allegedly had a predilection for child rape and suffocating Taliban prisoners jammed into shipping containers.

Certainly, the Taliban appear to be making the right noises in the media and have been of assistance with the recent evacuations.

Perhaps Dominic Raab, the British foreign minister, is right in being the first senior Western politician to say that we should start to engage with the Taliban. My goodness me, the woke media is making him pay for that. I get tired of hearing about why Raab didn’t call the Afghan foreign minister whilst on holiday.

Doesn’t the media understand that the whole of the Afghan minister’s team was at that time fleeing the country, taking all the stolen money they could carry? All they wanted was to save their own tainted skins. They couldn’t care less what the foreign secretary of a second-tier power had to say.

But why is Raab right? The answer is simple: the Taliban are calling the shots now.

At this time, that is a big deal for any of the left-behind interpreters who fear for their lives, and those UK nationals who were stupid enough to go back to Afghanistan for family weddings, or others who stayed on to look after dogs, etc. It makes me angry to think our troops had to risk their lives for some of these idiots.

We need the Taliban to cooperate to get all these people out, and they will not do that if we throw brickbats at them. Remember the old saying, “You catch more flies with honey, not vinegar.”

But what of the wider geopolitical game?

Many of those who have been recently engaged in Afghanistan know there are massive stocks of lithium in the country, a metal vital for batteries of all sorts, and huge amounts of copper. The Chinese have already been working in Logar Province, just outside Kabul, to extract copper.

Raab is being pragmatic and shrewd, and is right that we should be speaking and working with the Taliban. It’s no surprise to know that some of the biggest donors of the past Kabul government were Germany, Japan, and South Korea. All sought to gain influence, perhaps on behalf of Volkswagen, BMW, Mercedes, Mitsubishi, Nissan, Honda, and Hyundai. They all want lithium for their car industries.

The Chinese are intent on also getting their hands on Afghan materials for similar reasons. Ditto Iran, Turkey, Russia, Pakistan, and India.

Only a fool picks up his ball and walks away because he is upset at losing the game.

We lost a lot of good people in Afghanistan. Many others still suffer from their appalling injuries, and vast amounts of money have been wasted.

But the future is ahead, it’s time to wipe our mouths clean and get over our defeat.