Home / WORLD / ‘We HOPE THEY DIE’: Blocking emergency room and wishing death on ambushed officers may be final straw in BLM’s PR suicide

‘We HOPE THEY DIE’: Blocking emergency room and wishing death on ambushed officers may be final straw in BLM’s PR suicide 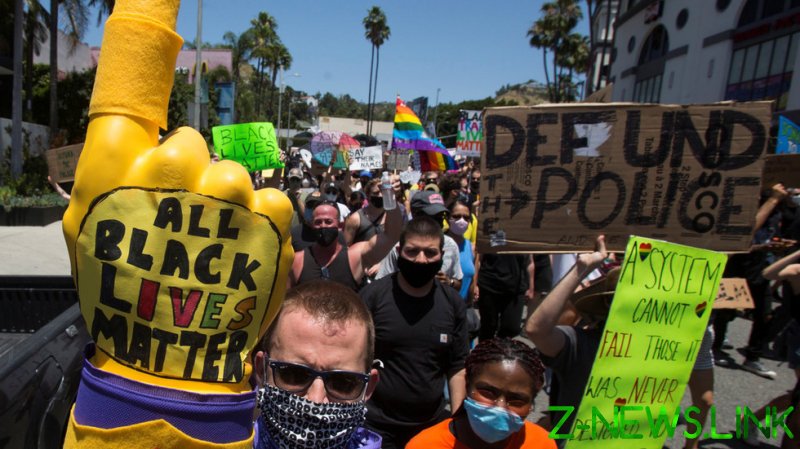 BLM has offered up many self-fails in recent weeks, the sort of anecdotes that stick in the minds of observers and turn the tide of public opinion against a cause that millions of Americans were eager to support initially. Even more than the group’s nonsensical demands — such as defunding police departments and “remaking” the US political system – its tactics are making it impossible for politically independent Americans to support.

Those tactics have included spreading false rumors about an Aug. 10 police shooting in Chicago, then racing downtown to loot the city’s most posh retailers, then defending the theft as “reparations.” Then there was the mob attack on a white motorist in Portland, who was pulled from his truck and brutally beaten before being left motionless in the street, and the torching of black-owned businesses around the nation.

Other incidents have brought the senselessness closer to home for many Americans, such as the BLM groups that marched through residential streets of such cities as Seattle and Portland late at night, threatening homeowners and chanting such messages as, “Wake up, wake up, wake up motherf***er, wake up.” Other BLM mobs have descended on outdoor restaurants from Washington to Rochester, New York, screaming at diners and demanding displays of obedient solidarity, such as raising a fist.

But Saturday night’s BLM debacle was the clincher, as protesters blocked the emergency room entrance and exit at a Los Angeles hospital after two Los Angeles County sheriff’s deputies were ambushed and shot repeatedly in their parked patrol car for no apparent reason. The protesters blocked the ER while yelling “We hope they die,” prompting the Sheriff’s Department to send out a tweet saying, “People’s lives are at stake when ambulances can’t get through.”

As if that wasn’t bad enough, as deputies tried to arrest a protester who refused to disperse, a reporter for government-funded National Public Radio interfered and had to be arrested, the Sheriff’s Department said. The reporter, Josie Huang, did not identify herself as a journalist and didn’t have any press credentials with her, the department said.

Protesters taunted police outside the hospital, saying such things as, “You’re all f***ing dying one by one.”

A video on social media also showed a celebratory reaction at the scene fo the shooting, where a smiling witness said repeatedly, “They just aired the police out, ni**a.”

Evidence of the damage that the anti-racism protest movement is doing to itself is showing up in polling, including President Donald Trump gaining ground on Democrat challenger Joe Biden in the presidential race. In Oregon, where violent protests have dragged on for more than 100 straight days, 66 percent of respondents in a DHM Research poll said they disapprove of the demonstrations.

Trump has had some success in painting Biden and other Democrats as enablers of rioting. The shifting political winds prompted CNN host Don Lemon to sound an alarm late last month, saying Democrats were trying to ignore the problem and risked losing votes in November.

Biden has tried to take a more strident tone against rioting since then and said Sunday that the Los Angeles shooting was “cold-blooded” and “unconscionable.” He said the shooter “must be brought to justice.” Trump took the excoriation further, saying that if the deputies die, “fast trial, death penalty for the killer – only way to stop this.”

Understanding that they’ll need strong voting support from people in the protest movement, Democrats are trying to walk a fine line between condemning rioters and condoning violence. Their hope is that the pieces can be picked up after the election.

“I’m voting for the guy who knows how to restore justice and peace, not the guy who incites more violence,” financial adviser Lili Balfour said on Twitter. “If Trump wins, we’ll be in a civil war for the next four years. I’m ready for peace and reconciliation.”

But actions like what we witnessed Saturday night in Los Angeles are just too repugnant to look the other way. Americans who are asked to raise a fist in support of BLM or vote for the demonstrators’ chosen candidate can’t help but cringe about the conduct of whom they’re standing with.