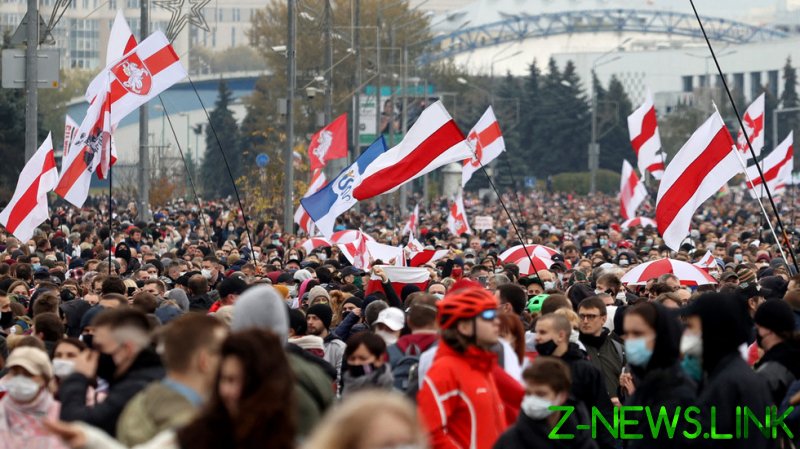 “I must admit that we have lost the streets,” Tikhanovskaya, who currently resides in Lithuania, told Swiss magazine Le Temps on Friday.

“We don’t have the means to combat the regime’s violence against the protesters. They have the weapons, they have the force, so yes, for the moment, it seems that we have lost,” she admitted, adding that Belarusians are “tired” and afraid.

Tikhanovskaya said her supporters are focusing on building structures for “the struggles of tomorrow” and on putting “constant pressure” on the government led by Belarus’s long-time President Alexander Lukashenko. She said that people “will be ready to take to the streets again, perhaps in spring.”

The politician was asked what she would say to any protesters who might be thinking about resorting to “illegal” methods of fighting the government. Tikhanovskaya replied that she could not advise on this matter.

“It’s very difficult for me to give advice to people who are under the constant control of the intelligence services. Can I tell them, ‘Act illegally but safely’? I don’t have an answer to that. I also know the responsibility that comes with my words. I cannot ask Belarusians to put themselves in danger,” she said.

Tikhanovskaya has accused Lukashenko of rigging the presidential election last August to secure a sixth term in office. The opposition held massive rallies in Minsk and other cities, some of which led to clashes with police. The protests continued for months, but appear to have waned significantly since the beginning of 2021.

Lukashenko maintains that the election was fair, and claims the protests are being incited from abroad. The EU condemned him for the “violent repression and intimidation” of protesters and imposed sanctions on Belarusian officials and entities.

Asked if Belarusian protesters should cooperate with those rallying against the government in Russia, Tikhanovskaya argued that the protest movements in the two countries are different in nature.

“I don’t think we should cooperate. Unlike in Belarus, [the protesters] in Russia have not reached the point of no return yet – nothing extraordinary has happened so far,” the politician replied. “There are demonstrations in Russia – there is a revolution in Belarus.”

People took to the streets in Russia last month, demanding that anti-corruption activist and opposition figure Alexey Navalny be released from prison. He was sentenced to nearly three years in jail earlier this month for violating the terms of his probation, which dates back to a 2014 fraud conviction.