Home / WORLD / ‘We don’t talk about Covid, we’re all tired of this’: Ronaldo dismisses coronavirus impact as teammate Cancelo forced out of camp

‘We don’t talk about Covid, we’re all tired of this’: Ronaldo dismisses coronavirus impact as teammate Cancelo forced out of camp 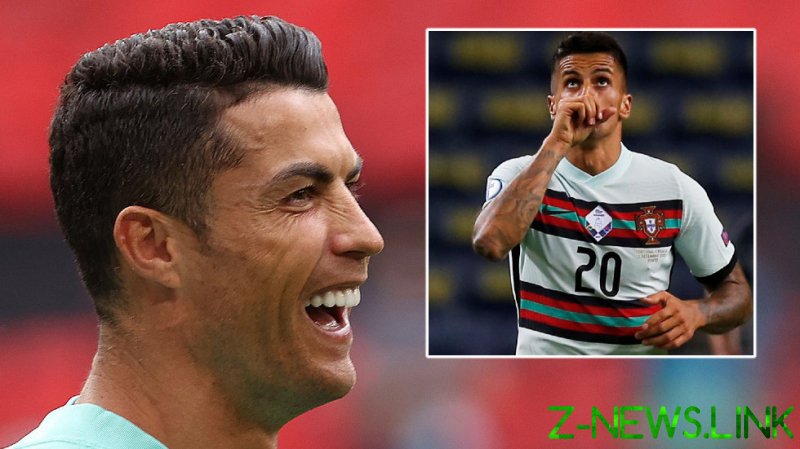 As football fans begin to re-enter football stadiums across Europe during the European Championships, it is difficult to dismiss the feeling of impending normalcy returning to the beautiful game.

The opening days of Euro 2020, taking place this summer after being delayed for a year by Covid, have seen thousands of fans from Europe mingle again inside and outside of arenas, albeit still in a limited capacity.

However, the grim specter of the virus which has brought most of the global sporting calendar to a standstill for more than a year still looms large over the Euro finals, with Manchester City star Joao Cancelo the latest name to have been afflicted by the virus at the worst possible time.

The Premier League winning fullback – who starred in Portugal’s 4-0 friendly win against Israel last week – was replaced by Manchester United’s Diogo Dalot in the squad after he was confirmed to have tested positive.

Ronaldo, who is set to play in his ninth major international tournament with Portugal, says that he and his teammates are “tired” of the virus, adding that he is unconcerned about any further potential impact it may have in the defense of the crown they won five years ago in France.

“I don’t think [Covid-19 is] a key factor,” the Portugal skipper said at a press conference ahead of their opening game with Hungary.

“It’s a shame Joao tested positive but everyone in our team is at peace. We don’t talk about Covid-19 because we’re all tired of this.

“We know how to live with it and deal with it. It’s a sad situation but we’re all focused. For many players, this is their first Euro and nothing will shake us. We respect all the rules but we’re just focused on playing. We’re not thinking about anything else at all.”

Ronaldo, 36, is undoubtedly in the latter stages of his legendary career but his influence on both the international and the club game remains unhindered by his age – and he also admitted that he may well be tempted into requesting a transfer this summer once his duties at the Euros are completed.

“I’ve been playing at the highest level for many years so this doesn’t faze me at all,” he said. “If I were 18 or 19, maybe I’d have some sleepless nights. But I’m 36 years old and whatever comes next will be for the best, whether that’s staying at Juve or getting a transfer.

“The crucial thing now is the Euro. It’s my fifth Euro but for me it’s like my first, so I want to start on the right foot. We want to play a good match and have only good thoughts in our first match to our last.“

Should Ronaldo add six goals to his international tally of 104 during this tournament, it will stand him alone as the top scorer in the history of international football, moving past Iran’s Ali Daei in the process.

For now, though, Ronaldo’s aspirations are team-based – and personal accolades can come later.

“It’s a nice record but I’m not thinking about it too much, winning the competition for a second consecutive time is a more beautiful objective,” he said.

“It’s obviously not the same team as in 2016; this is a much younger side with enormous potential. But how we do in the competition will tell us which team is better.”