‘We don’t know where to run’: South Africans brace for new wave of ‘devastating’ riots after ex-president Zuma jailed (VIDEO) 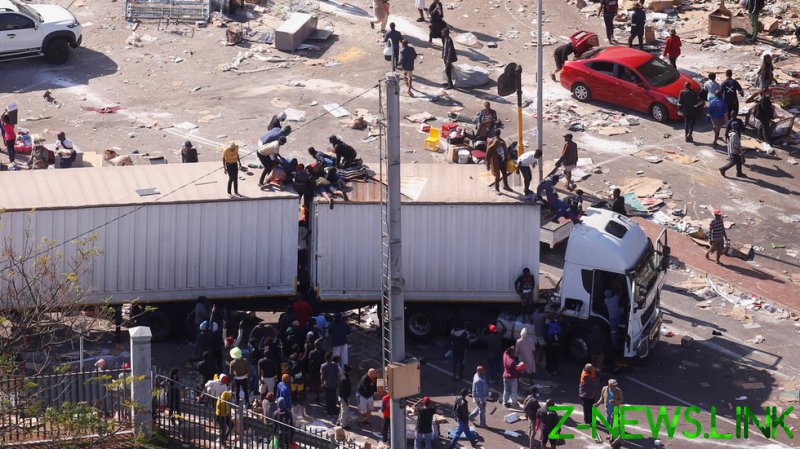 As the wave of mayhem died down, residents formed cleaning crews and security watch teams to deal with the aftermath of what South African President Cyril Ramaphosa described as one of the worst instances of violence since the apartheid regime ended in the early 1990s.

“How dare we allow this mall to be looted? That’s why we’re here,” Nhla Nhlaous, local community leader, told RT in Johannesburg, describing the need for volunteers to patrol the streets. “We’d rather have our lives ended. We can’t live on our knees.”

Others rushed to stock up with groceries and fuel, fearing that the looters might return.

“We are not safe in South Africa. We don’t know where to run,” Tshepo Mabilo, an owner of a non-profit organization, said.

It’s very much devastating. I’m angry and disappointed because of the leadership – from top to bottom.

RT’s Paula Slier reported that the situation on the ground remains tense. She said news crews travel with an armed security detail to avoid being attacked for their equipment.

Zuma, 79, who ruled the country from 2009 to 2018, was sentenced to prison for 15 months for failing to appear for a corruption inquiry. The veteran politician argued that the charges against him were politically motivated. His supporters held protests in various cities.

The ensuing violence has left at least 72 dead as of Tuesday, according to South African News24 website. Police arrested 1,230 suspects for disturbing the peace and looting.

Durban Mayor Mxolisi Kaunda was quoted by the media as saying that 45,000 businesses were affected by the unrest.

Ramaphosa vowed to protect citizens from criminal activity, and ordered the army to be deployed on Thursday to help the police maintain order. “Our Constitution is the foundation of the rule of law in our country,” the South African National Defence Force said on social media.