Home / WORLD / ‘We don’t believe you’: NFL fans in disbelief after search of 650,000 emails ‘didn’t find any offensive content’ amid Gruden row

‘We don’t believe you’: NFL fans in disbelief after search of 650,000 emails ‘didn’t find any offensive content’ amid Gruden row 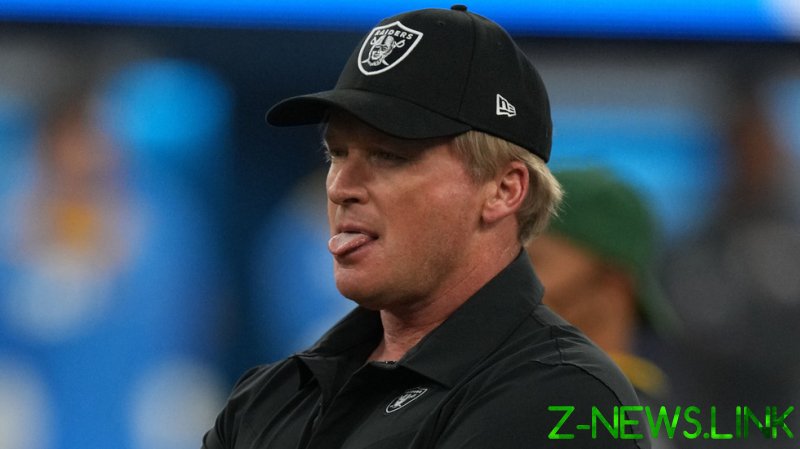 An anonymous individual familiar with the documents revealed the news to The Associated Press.

They said that the NFL didn’t “identify other areas and other individuals it has to contact at club leadership or league leadership levels”.

The league hasn’t yet publicly released its findings across 650,000 emails that independent investigators gathered during an investigation into sexual harassment and other conditions in the Washington Football Team’s workplace.

“The NFL did not identify any problems anywhere near what you saw with Jon Gruden,” claimed the person in question.

Gruden resigned at the turn of the week as the Las Vegas Raiders’ head coach after offensive comments in emails written from 2011 to 2018 to Bruce Allen, who was Washington’s club executive at the time, emerged.

Gruden was working as an ESPN analyst at the time, and used slurs such as “f*ggot” and “anti-football p*ssy” to refer to NFL commissioner Roger Goodell while saying that African-American Players Association executive director DeMaurice Smith had “lips the size of Michelin tires”.

“Our players deserve a full accounting of any other NFL misconduct, which is why we once again call for the league to release all of the emails from the Washington investigation,” tweeted Smith.

“Any evidence or knowledge that this has been suppressed must be brought to light.”

Ahead of any revelation, though, fans have reacted to the AP report and the anonymous source’s claims that they will not throw anything offensive up with disbelief.

Furthermore, it has been stated that emails between top NFL counsel Jeff Pash and Allen discussing league issues and topics such as politics, according to the New York Times, have been put in a “different category” from Gruden’s and were an “appropriate” part of the former’s job.

“So there should be no problem releasing all those racism-free, homophobia-free, misogyny-free emails, right?” a punter asked.

“The NFL, which is run by the owners, says none of the owners sent offensive emails but one of the coaches, who do not run the NFL, did. Okay,” was a dryer take.

“Over and over again. My six-year-old lies better,” was a popular reply, when it was asked if Gruden “just sent emails offering his unsolicited opinion on topics and personnel, with no reply or retort by intended receivers”.

“So let me get this straight,” started another critique.

“This was an investigation on sexual harassment into the Washington football team and the only bad emails found were from a rival coach who wasn’t even employed by the NFL at the time. Yeah, sounds legit.