Home / WORLD / ‘We didn’t stop to think about it’: Michigan Gov. Whitmer apologizes for flouting own Covid-19 rules when dining out

‘We didn’t stop to think about it’: Michigan Gov. Whitmer apologizes for flouting own Covid-19 rules when dining out 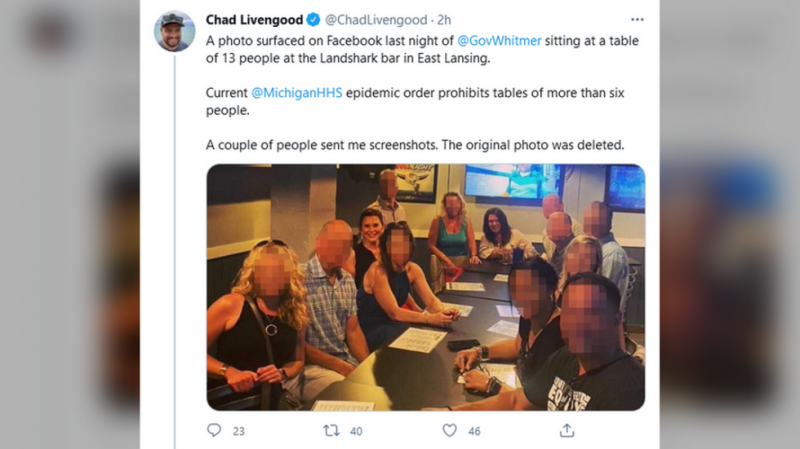 Lockdown-championing Michigan governor Gretchen Whitmer has been called out for hypocrisy after a photo of her huddling together with 12 other people at a table at a bar in East Lansing, Michigan surfaced on social media. The image was shared by Detroit journalist Chad Livengood, who said it was posted on Facebook on Saturday but was since deleted.

The seating arrangement in the photo is in direct violation of Michigan’s strict social-distancing protocols for dining establishments that currently allow only a maximum of six people sitting at one table. In addition to that, tables could not be moved together and should be at least six feet apart from each other.

Caught red-handed, Whitmer released a statement, apologizing for blunder. In her apology, Whitmer admitted that she did not think twice about her potentially being in violation of her own Covid-19 policy as more people arrived in the restaurant and “the tables were published together.”

“Because we were all vaccinated, we didn’t stop to think about it,” the governor acknowledge, adding that it was “a mistake” on her part.

The apology did little to shield her from criticism. Some argued that the rules were nonsensical to begin with, but blasted Whitmer for putting herself above the law she herself championed.

“No one is against having fun. We are against your rules that never seem to apply to you,” one observer said. Another poked fun at Whitmer’s attempt at damage-control: “I hope every lawyer will use this defense when fighting her idiotic fines for their clients.”

It’s not the first time Whitmer courts controversy for doing the opposite she preaches publicly. Last month it was revealed that she took a “personal trip” to Florida while her government was warning constituents against travelling to the Sunshine State for a spring break. Whitmer communication’s director defended the trip, saying that she was helping her ailing father there. Apart from Whitmer, at least two of her senior advisers faced backlash after they were spotted hitting beaches outside the state, in Florida and Alabama.

Whitmer herself dismissed the reports as “partisan hit jobs” on her team.

This week the governor has announced a two-step plan to lift the remaining Covid-19 restrictions. From June 1, there will be no longer limits on outdoor capacity, while indoor gatherings will stay at 50 percent capacity and unvaccinated people will have to wear masks until July 1. From July 1 onwards, the remaining caps on capacity will go. While there won’t be a state-wide mask mandate from that date, businesses and workplaces will still have the right to require masks.