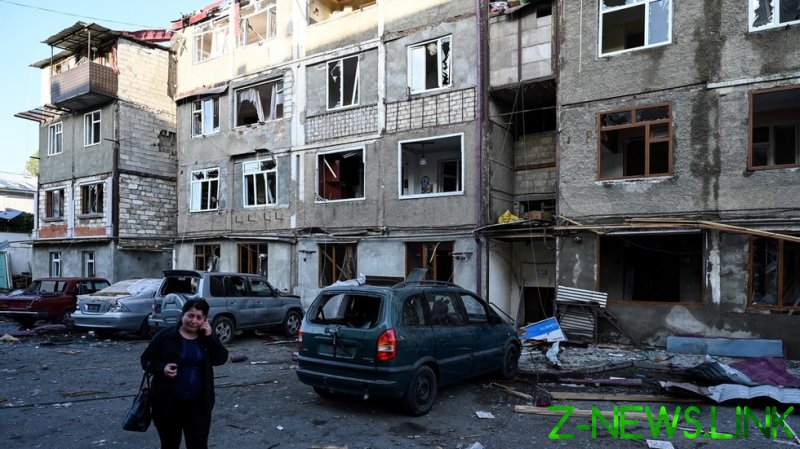 In an interview with Al Jazeera, published on Saturday, Aliyev said that the Organization for Security and Co-operation in Europe (OSCE) group on Nagorno-Karabakh, co-chaired by the US, France and Russia, “has been working for 28 years to mediate a solution, but to no avail.”

The Azerbaijani leader stressed that a settlement to the conflict with neighboring Armenia must be found “as soon as possible.”

We are not in a position to listen to statements like ‘Stop it, we will work [with you], we will negotiate, we will help.’ We have heard this many times. We do not have time to wait for another 30 years. The conflict must be resolved now.

The decades-long dispute over Nagorno-Karabakh – a large Armenian-populated enclave within Azerbaijan – turned violent on September 27, when Armenia and Azerbaijan blamed each other for aggression long the border. Heavy fighting continued throughout the week, with deaths reported among Armenian and Azerbaijani forces, as well as civilian casualties. Several buildings, including a hospital, were damaged during shelling of the disputed region’s capital on Friday.

On Thursday, the leaders of Russia, France and the US issued a joint statement, urging for an immediate end to the violence and for both sides to resume talks. Aliyev’s office reported that President Macron of France had made a phone call to the Azerbaijani leader on Friday, again urging for a ceasefire and negotiations.

Aliyev, however, told Al Jazeera that talks would be “meaningless” unless Armenia agreed to “the return of the occupied territories to Azerbaijan.” The region proclaimed itself independent amid a bloody war in the early 1990s against the backdrop of the breakup of the Soviet Union, and has remained closely allied with Armenia.

Armenian Prime Minister Nikol Pashinyan, meanwhile, told Canadian newspaper The Globe and Mail that “a ceasefire can be established only if Turkey is removed from the South Caucasus,” referring to Ankara’s strong support for its historical ally Azerbaijan. He also said that “terrorists” from the Middle East are fighting in Nagorno-Karabakh “under Turkey’s sponsorship.”

Turkish Foreign Minister Mevlut Cavusoglu said on Friday that “if the situation is not resolved” and Azerbaijan does ask for assistance, Ankara “would not hesitate” to provide it.

President Macron previously said that France has “credible” information that Syrian militants arrived in Nagorno-Karabakh through Turkey. Russia’s Foreign Ministry also warned that the deployment of militants from Syria and Libya creates “long-term threats to the security of all countries in the region.”