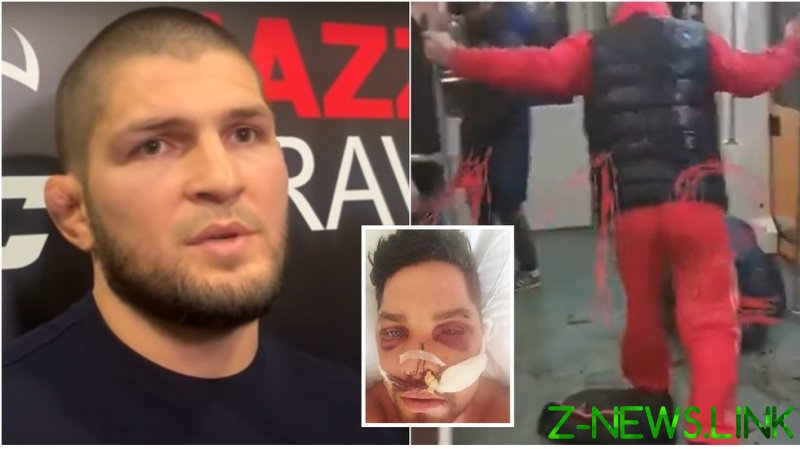 Roman Kovalev was awarded a medal for bravery after stepping in to defend a woman when she was reportedly being harassed by a group of three men on the Moscow underground.

Kovalev was left with severe facial injuries after being brutally beaten by a trio from Dagestan, in scenes were widely shared on social media and shocked Russia.

But speaking at an event held by his Eagle FC MMA promotion in Sochi over the weekend, Dagestani former UFC lightweight champion Khabib took issue with much of the coverage regarding the incident.

According to the 33-year-old star, the headlines highlighted the fact that the trio were from Dagestan, when he argued their nationality was not necessarily relevant.

“Someone beats someone up – everywhere they write Dagestanis,” an animated Khabib told members of the media.

“We also have feelings – there are 3.5 million Dagestanis, if not 4 million of us.

“I think it’s wrong – when one person does the wrong thing – to write in all the media ‘Dagestanis, Dagestanis’.

“But there are at least 3.5 million Dagestanis. There are intelligentsia, there are scientists, athletes, doctors.

“There are people who very worthily represent not only Dagestan, but all of Russia.

“But as soon as one sick person does something bad, all the media, including you, throw it out there that Dagestanis did this and that.”

Khabib added: “For example, what was the name of the guy who received an award? Roman Kovalev. All the media wrote that a man was given an award after being beaten up by three Dagestanis.

“What for? Not a single person from the media even knows the names and surnames of these three sick people.

“Why does everyone write Dagestani? I’m also Dagestani. I disagree with that. Why write in the plural?”

Khabib pointed to other incidents across Russia and its multi-ethnic population where, according to the UFC icon, emphasis was not placed on the ethnicity of the perpetrators.

“Ninety percent of the media write this way. When did you ever see at least one good, positive piece of news about Dagestan in the last 10 years?

“Well, let’s exclude stories that Khabib won something. Did anyone write anything from the big media? And somewhere, for example, in Perm or Kazan, a person goes out and shoots an entire school – then no one writes anything [about his ethnicity].”

Khabib himself faced criticism from some quarters for using the Metro attack to taunt former Octagon rival Conor McGregor.

Referring to the bravery award bestowed on 25-year-old Kovalev by the chairman of the Russian Investigative Committee, Alexander Bastrykin, Khabib shared a picture of McGregor on Instagram along with the message: Where’s my medal from Bastrykin? A group of Dagestanis also beat me up.”

The comment was a jibe at McGregor regarding his defeat to Khabib in their 2018 grudge match in Las Vegas, which was followed by a mass melee involving the Irishman and members of Khabib’s team inside the Octagon.

Attack victim Kovalev later said he saw “nothing bad” in the post from Khabib, who himself said on Sunday it was “more of a joke.”

“No one in their right mind could support the brutal actions of these three people.

“That should be clear to everyone… I think people who know me understood correctly what I meant,” said Khabib.