Home / WORLD / Wayne Dupree: Less than a week in, we can already see the four years of economic devastation that lie ahead for us under Biden 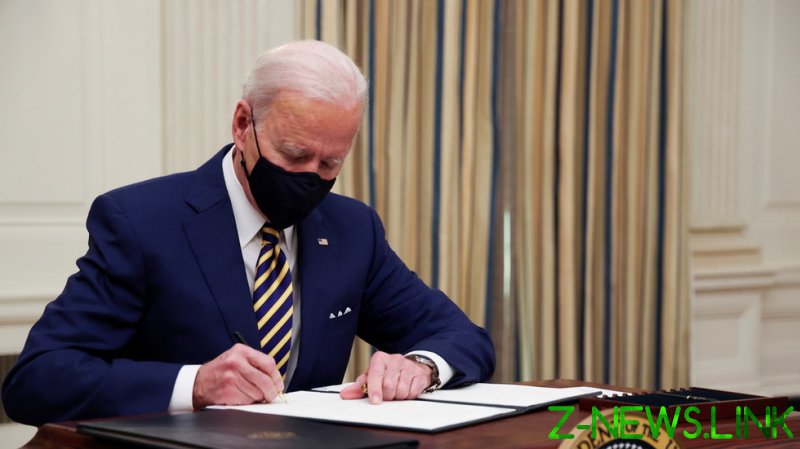 So much for “I will be president for EVERY American.” Joe Biden has just put us back on the fast track to total government control over every aspect of our lives with the signings of his executive orders in the past week.

In addition to erasing President Donald Trump from existence, his actions do nothing more than pander to the far left-wing base, not the majority of US citizens. Next up, granting 11 million illegal immigrants a path to citizenship and, whoopee, millions more will make their way to our open borders.

​I say let him go. The people who elected him need to feel his liberal eliteness. Like the people of New Mexico who helped Biden win the White House, and now just two days in they’re in a panic because almost all the oil and natural gas they drill is on federal land. Half of their state income comes from this drilling to pay for their schools, social programs, police etc. He warned them that he would ban drilling on federal land, yet they ran out and supported him; you got exactly what you voted for, live with it.

​Maybe if Biden signs another executive order, he could have all American paychecks go straight to the US Treasury. The interns there will auto-deposit our share into our credit card account minus all taxes and other charges taken out. Just think, no more taxes to figure out, and nearly no more money to spend at all. Government wins, people lose!

​If Trump had issued an executive order eliminating 40,000 jobs on his first day in office, there would have been TV reporters on the ground in Canada and the USA interviewing displaced workers for the 6 o’clock news on the day it happened. Since this is a negative for the Democrats, however, most media outlets choose not to report it. They will act as the PR office for the White House, controlling the release of information and spinning it to make it favorable to the left.

​They won’t tell us just how much it will cost the average person per year by rejoining the Paris accord. Or by how much heating costs will increase. No, it’s painted as a good thing, as Americans nobly doing their bit to save the planet. That the climate accord will be a catastrophic failure which will cost them their livelihoods and their savings won’t get mentioned.

Has President Biden done anything that will increase wages or stimulate job growth, or help the average family meet their housing or food costs? Er, no. I’d like some of his supporters to explain how rejoining this climate accord, stopping the Keystone XL pipeline, or anything else he has done will benefit the average person. I’ll wait.

​Dems will tell you that Biden will advance energy for the future, like wind and solar. The truth is wind and solar energy are economically unfeasible and can never meet the needs of industry, manufacturing, or the power grid in general. It will lead to skyrocketing energy costs, which will hurt the economy greatly. Look at California, with all of their brownouts, because they try to get by on unreliable solar and wind power, mixed with fossil fuels. If alternative energy is so feasible, it would be taking off like gangbusters in the private sector where companies could make handsome profits. By the way, you can’t make steel without coal.

​Dems don’t love America. They don’t even like America anymore. They hate our beginnings, hate our Constitution, hate our history, and don’t appreciate the system of capitalism that made our country great. Nothing America stands for is anything a liberal wants to embrace these days. Europe is their mecca, and globalism their religion. Elections have consequences, folks. Maybe people ought to start looking at policy differences a bit more than personality differences. I’m not optimistic about that, though.

​Sell what you can, pay off any debts you can, set yourself up to need as little as possible. A rough economic ride lies ahead, and those who are unprepared will face tough times. Biden will collapse the economy and is putting the whole country at risk. Inflation and an ever-shrinking middle class mean fewer taxpayers, which means less money for the free ride that the government is selling. Those who buy into the free handouts and come to depend on them will be hung out to dry when the money runs out.

​The ignorance of the voting public is what sickens me most of all. People paid no attention to the policies or positions of the candidates. They voted strictly on personality. They did not like the way Trump tweeted, so they ignored all the good he did and voted for a career hack who will take us forward to the worst of times. America is in worse trouble than I even feared, and we’re only five days in.

​Maybe people should not be allowed to vote for president. Each voter should be presented with a list of the ten most controversial issues and asked to choose for or against each one. After votes are tallied, the candidate representing the winning side on the greatest number of issues should be made president. Hands down, Trump would have won in a landslide. Liberals do not represent most Americans.