Home / WORLD / Wayne Dupree: It sounds harsh, but those who risk losing their homes as the US eviction ban expires have only themselves to blame

Wayne Dupree: It sounds harsh, but those who risk losing their homes as the US eviction ban expires have only themselves to blame 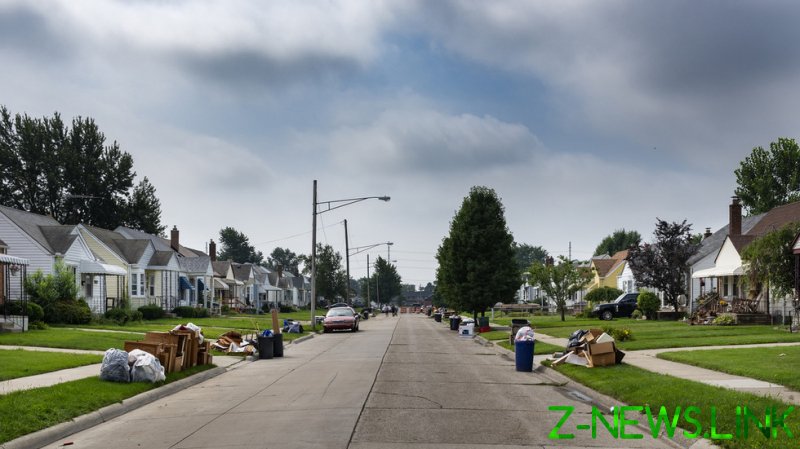 The left’s darling, Alexandria Ocasio-Cortez, did something nobody expected on Sunday: she blamed fellow Democrats and the Biden White House – not her hated Republicans – for allowing the eviction moratorium to expire.

Millions of American families are at risk of being kicked out of their homes because Congress has not done its job to fix the situation properly. They kicked the can down the road month after month, and now the rent (so to speak) is due.

“The House and House leadership had the opportunity to vote to extend the moratorium, and there was frankly a handful of conservative Democrats in the House who threatened to get on planes rather than hold this vote,” the New York representative said on CNN’s State of the Union. “We have to really call a spade a spade. We cannot, in good faith, blame the Republican Party when House Democrats have the majority.”

Roughly 3.6 million people in the US face eviction in the next two months, according to the US Census Bureau’s Household Pulse Survey.

My question to AOC is, why shouldn’t it expire? Many of these renters have been earning more being unemployed so gave up looking for a job. Some were buying things like motor homes and other toys, rather than paying their rent, while landlords needed the money to pay mortgages.

This might be hard to swallow, but it’s hard to feel sorry for these people if they didn’t save up during the pandemic, because they knew this day would come sooner or later. Yes, many Americans truly required heartfelt federal or state assistance during the crisis, but a lot also went out and spent a record amount of their subsidy money on vehicles, personal items, home furnishings, etc.

Why should landlords get stiffed on their rents while others act like that, or sublet rooms, collecting rent, which should be considered a fraud? The system has been set up to be gamed. How are the property owners expected to pay their bills if they can’t fill their units with paying customers? What about the banks that repo the properties? Are they expected to be a housing welfare agency? It is a harsh reality that you have to pay your way in this world.

Think about it like this; many renters haven’t paid rent in 18 months, despite receiving checks from the federal government and additional monthly unemployment benefits. Utility companies have also been prevented from shutting off electricity and water for non-payment. It’s time to cut the cord. People can’t live off of others forever, whatever lefties like AOC think.

During the pandemic, I still paid rent on time every month. But a bunch of freeloaders decided they would live off those of us who’ve kept working and paid our taxes throughout. Now, with the need to either pay their rent or be evicted, some of these people might finally decide to get off their backsides and find a job. What will help is if the government no longer gives supplements to the jobless and people have to follow the original rules for getting unemployment benefits (apply for jobs and take the first one that hires them).

Government stimulus and freebies have just delayed the true economic effects of Covid. The slow-motion financial train wreck of the US economy can be avoided for only so long. Our economy needs people back at work, earning money, paying bills, buying commodities, paying rent, and paying taxes. The government giveaways during the pandemic were overly generous, more than what many had earned in work, incentivizing people to stay home and not pay bills.

I have a friend whose entire life savings are in five houses that he rents out. He still owes a mortgage on three of them, and the lack of income from not getting the rent may cause him to file for bankruptcy. AOC and her ilk don’t care about those people until they become homeless themselves.

Come on, AOC, sure you can blame the Republicans. You can certainly blame Trump – it’s always his fault. It’s horrible when people are expected to actually go back to work and pay their own bills after being paid very well to sit on their butts and play video games for a year and a half. Good ol’ Uncle Sam will foot the bill! That’s the Democratic way. See, Dems judge success by how many people are on government assistance (that’s where they want you, as you’ll keep voting for them to keep getting the money). Republicans judge success by how many don’t need it – just one of the MANY differences in ideology.

I guess the bottom line is that I am saying this with all due respect. AOC and her squad are typical Democrat politicians who don’t have the intellect for economic strategy or managing budgets. They have no idea what’s involved in making payroll for a small business. They have no intellectual capacity for planning beyond what superficial, means-nothing, pander-statement they’re going to spew out to a special interest in the next five minutes.

Just remember this Dems, and, yes, Republicans, too: while you’re spending other people’s money liberally without their permission, banks need landlords to be able to pay mortgages too.

What we really need is a new generation of lawmakers who will free people from the bondage chains that we’re being wrapped in by all these unconstitutional mandates. Politicians who will instill confidence into people that they can be prosperous with their own efforts like those before them who have realized their American Dreams. Only then can the country move forward to a higher ground and help other countries around the world prosper.