Home / WORLD / WATCH: Would-be robber SQUEALS LIKE A PIG after being body-slammed & pinned to pavement by his intended victim in viral VIDEO

WATCH: Would-be robber SQUEALS LIKE A PIG after being body-slammed & pinned to pavement by his intended victim in viral VIDEO 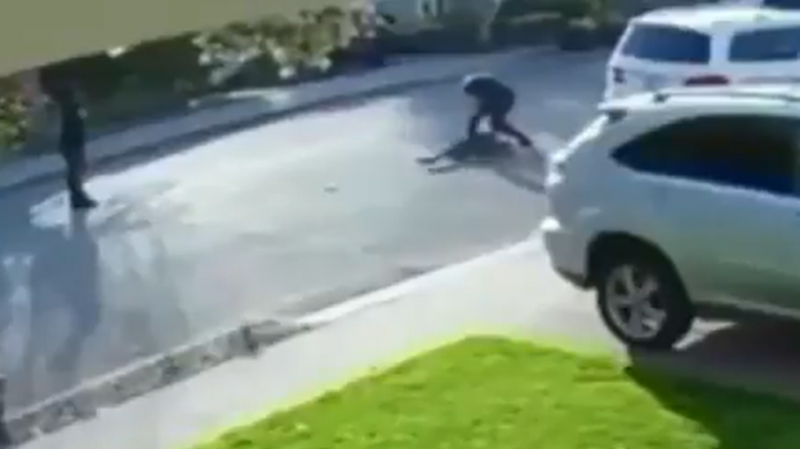 The clip begins with two assailants running toward a man as he exits his sport-utility vehicle after parking on a residential street. The smaller of the two robbers points a gun in the man’s face, and the would-be victim walks slowly backward on the driver’s side of his vehicle.

The man suddenly punches the armed robber, quickly grabs him from behind and body-slams him on the street, at which point the larger assailant backs away from the altercation to stay out of harm’s way. As he’s grabbed from behind, the smaller robber yells, “No, OK, OK,” just before being thrown down like a rag doll.

The smaller man drops his gun as he hits the pavement, and the weapon bounces several feet away. He then squeals loudly in a high pitch as the would-be victim uses a knee to pin him to the ground. A voice from off camera can be heard saying, “Hey, let him go.” The intended victim picks the robber up and throws him toward his accomplice, saying “Get the f**k out of here.” Both assailants run away, leaving the gun behind.

“He quite literally squeals like a pig,” podcast host Matt Walsh said of the armed suspect. “I don’t think I’ve ever heard that sound from a human before.” Another Twitter user quipped, “Acute failure of the victim-selection process.”

The incident reportedly occurred in San Leandro, California. The San Francisco Bay Area city has been plagued by robberies, particularly those targeting people of Asian descent. Violent crimes against Asians in San Leandro jumped 283% last year, according to police data.

Tags after being robber slammed squeals watch would