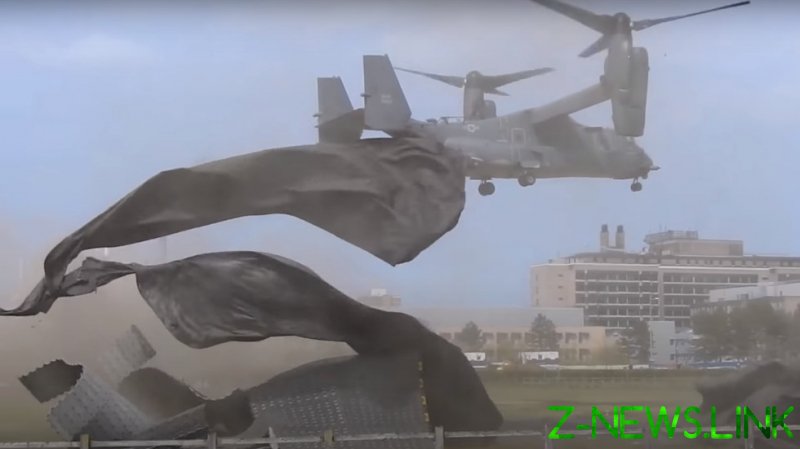 An American CV22 Osprey tiltrotor military craft was captured on film as it attempted to take off from Addenbrooke’s Hospital in Cambridge on Wednesday, with the downward blast of air from its propellers destroying the pad and sending parts flying across the hospital grounds.

A major trauma center in East England, Addenbrooke’s provides a helipad used by a number of emergency aircraft, including the East Anglian Air Ambulance, the Magpas Air Ambulance and the Essex and Herts Air Ambulance. Those craft have been diverted to the Cambridge City Airport about three miles north while repairs are underway, according to a spokesman for Cambridge University Hospitals cited by ITV News.

“While our normal helipad is being repaired, air ambulances will temporarily land at nearby Cambridge City Airport and patients are then transferred to the hospital in road ambulances with critical care staff on board, meaning we can continue to see and treat them as normal,” he said in a statement.

Major Keavy Rake of the US Air Force’s 48th Fighter Wing – based in nearby Lakenheath at the largest American air station in the UK – also commented on the incident, saying that while the area was surveyed according to military protocol, “some damage did occur.”

“We are taking steps to rectify as soon as possible. Our units are continuously coordinating with our local partners to improve operations,” he continued. “We are greatly appreciative of the relationship and coordination we have with the UK.”

The Osprey was carrying out a drill for medical transfer operations during the mishap, though it remains unclear why Addenbrooke’s was chosen for the training mission.