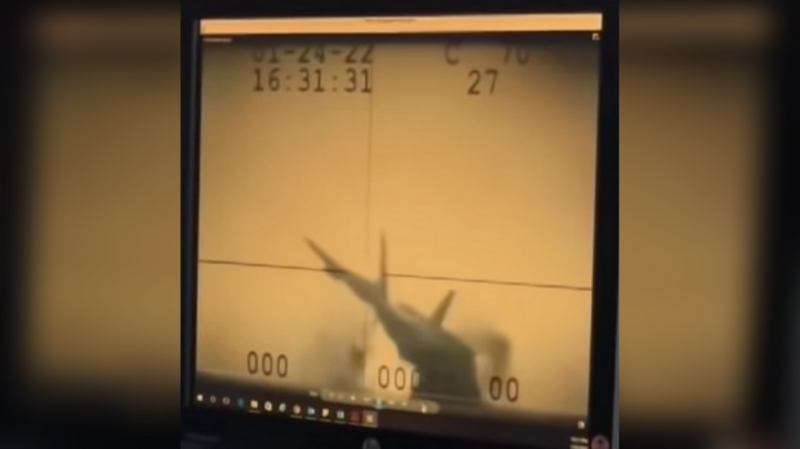 A new video emerged online on Sunday purporting to show the American F-35C fighter jet crash-landing and skidding off the deck of the aircraft carrier USS Carl Vinson in the open sea somewhere south of China.

The incident occurred on January 24, when a US Navy F-35C crashed while landing on the USS Carl Vinson aircraft carrier at an undisclosed location in the South China Sea. The plane’s pilot ejected safely, though six sailors received injuries while the plane’s wreck was being flung overboard.

The new video, presumably shot by a member of the aircraft carrier’s crew, shows surveillance footage of the crash played on a monitor. Footage shows the F-35C fighter jet approaching the carrier for landing as flight control shouts warnings to “wave off” the landing. The aircraft, which apparently undershot the flight deck, then proceeds to hit the ramp with its tail and engine.

The impact, which knocked off parts of the plane’s tail, sends the aircraft spinning across the deck.

Footage shows the F-35’s rear catch fire immediately upon impact. The pilot ejects from the damaged aircraft halfway across the deck. Luckily, the plane was heavily tilted to its left side at that moment, and the catapult sent the pilot straight into the sea rather than into the carrier’s superstructure to the plane’s right.

The plane then slid across the deck, falling off the carrier and into the sea. Firefighting crews are seen running with hoses to douse the deck seconds after the aircraft falls off the ship.

Footage of the incident from a different angle had emerged earlier, showing the plane buzzing the carrier moments before the ill-fated landing attempt. Another leaked image showed the aircraft afloat at sea shortly after the incident. While the US Navy has not immediately commented on the emergence of the new video, it had confirmed the authenticity of the previous leaks.