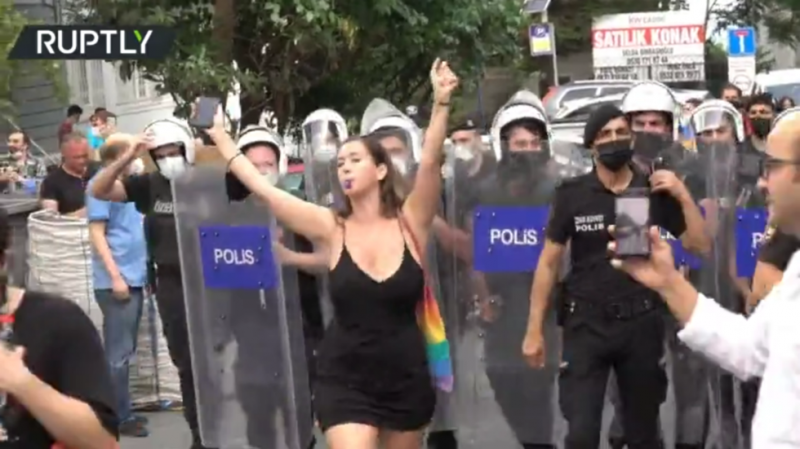 Law enforcement personnel fired tear gas at a crowd that gathered in central Istanbul on Saturday to support gay rights in the country. Local authorities had refused to authorize the event.

Footage from RT’s video agency Ruptly shows helmeted police officers with riot shields pushing protesters off the street. A woman carrying a rainbow-colored bag was spotted blowing a whistle as she walked down the middle of a road  – with a line of riot police following behind her.

In one clip, a demonstrator is seen banging against one of the riot shields, triggering a confrontation.

Police were also spotted with crowd-control weapons as they chased down protesters who took part in the banned gathering.

Around 20 people, including a photojournalist, were arrested, according to media reports.

Homosexuality is legal in Turkey, but the country’s conservative ruling party, led by President Recep Tayyip Erdogan has grown increasingly hostile towards LGBTQ rights. Officials in the country have been wary of signing off on Pride events, citing security concerns.

Over the past several months, Erdogan’s government has clashed with student protesters seeking a more liberal approach to social issues. In February, student demonstrators who opposed the appointment of an Erdogan ally as rector of Istanbul’s Bogazici University hung a piece of artwork depicting the Kaaba in Mecca – an Islamic holy site – and pictures of the LGBTQ rainbow flag. Four students were later arrested and charged with “inciting hatred” for displaying the image.

Erdogan responded to the incident by telling supporters of his AK Party that the country’s conservative movement would “carry our young people to the future, not as the LGBTQ youth, but as the youth that existed in our nation’s glorious past.”

However, Ankara’s opposition to LGBTQ rights has further strained its tenuous relationship with the European Union, complicating Turkey’s bid to join the bloc.