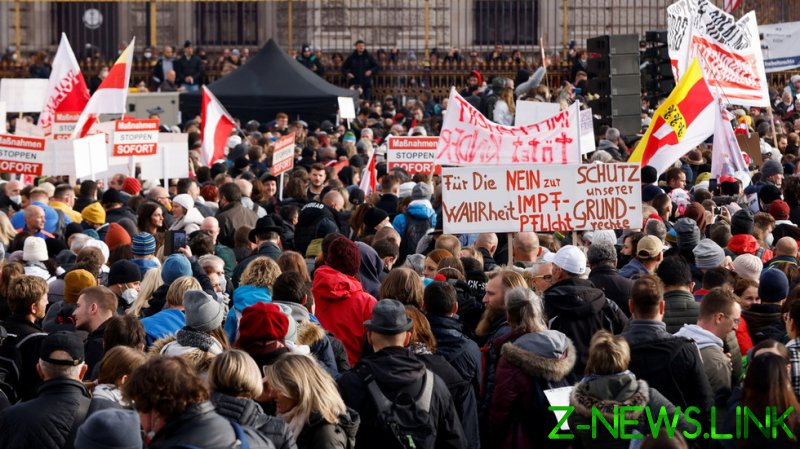 The Austrian capital Vienna on Saturday saw the largest protest turnout since the start of the Covid-19 pandemic. A total of 38,000 people took to the city streets to join a dozen demonstrations protesting government measures.

The protests came a day after the Austrian authorities ordered nationwide compulsory vaccination from February 1 and imposed a full lockdown, starting Monday. The massive procession that spanned over several kilometers marched along Vienna’s central ring road. The city center was paralyzed for several hours as traffic was restricted.

Austria’s right-wing Freedom Party, whose members joined the rallies, put the number of protesters at 100,000. Some demonstrations were also attended by members of various far-right groups. The protests were generally peaceful but footage published by Ruptly video news agency showed several scuffles between the police and the demonstrators breaking out.

Law enforcement spoke of a total of five arrests. One incident saw a protester attempting to grab an officer’s gun and take it from its holster. In another incident, the officers were pelted with bottles and fireworks and had to use pepper spray in response.

Hundreds of kilometers away from Vienna, in the French capital Paris, events took a more dramatic turn. There, a demonstration against the government Covid-19 measures coincided with the third anniversary of the Yellow Vests movement. Hundreds of protesters took part in the protest, which quickly turned into clashes between the demonstrators and law enforcement.

The protesters were building barricades and setting them on fire as well as pelting police with bottles and various other projectiles. Law enforcement responded with profuse amounts of tear gas, sometimes filling entire streets with thick smoke to disperse the crowds.

Rome saw a massive demonstration against Italy’s Covid-19 health pass, also known as the Green Pass. Some 4,000 people gathered in the center of the Italian capital, according to the police. The demonstrators were waving national flags and chanting “Freedom” and “No Green Pass,” referring to the vaccination certificate needed to enter various public venues such as clubs or bars.

The crowd staged a sit-in in the Circus Maximus – an ancient Roman chariot-racing stadium converted into a modern-day park. They remained there after sunset, lighting the area with thousands of phones and colored smoke bombs. The rally was peaceful, though, as the police did not report any incidents.

Unlike Rome, Italy’s northern city of Milano saw clashes between protesters and the police as law enforcement officers sought to break up an unauthorized rally at the city center. Large police forces were deployed to the city center and several squares were cordoned off.