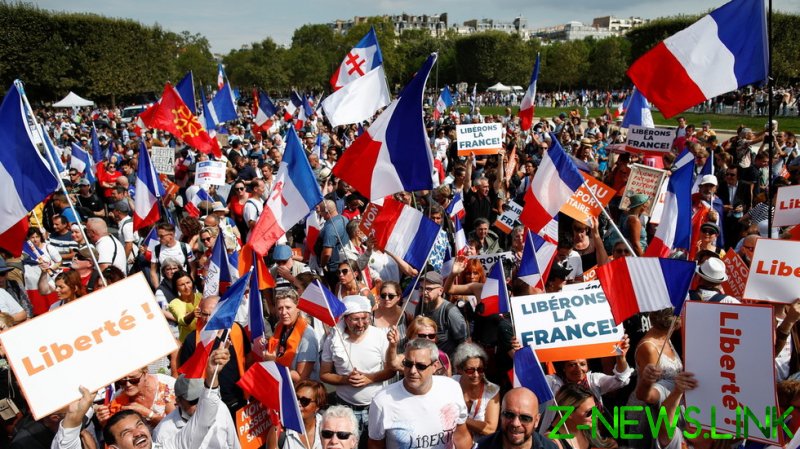 Massive crowds flooded the streets of the French capital on Saturday. Several thousand demonstrators marched through the Boulevard Saint-Marcel in the southeastern part of the city toward the Place de la Bastille.

People were holding placards that read ‘Stop’, chanting ‘Freedom’ and beating drums. Some of the protesters were seen wearing yellow vests – a symbol of another massive protest movement that was active in France for about a year and a half between October 2018 and March 2020.

Some 2,000 joined the march, according to the French media. At the Place de la Bastille, where the march was heading, the police used tear gas against a group of demonstrators that sought to join the protest, according to RT France’s journalist, Charles Baudry.

Demonstrators also attempted to deviate from the major march route in Paris on several other occasions, prompting the police to intervene, the French media reported. The rallies went off peacefully otherwise.

Large gatherings were also seen in other parts of the city. A total of five rallies were scheduled in the French capital on Saturday. A massive crowd gathered near the Eiffel Tower. The demonstrators were waving French national flags and were holding a large orange banner with the word ‘Freedom’ written on it.

The rally at the Eiffel Tower was led by Florian Philippot – the leader of the right-wing Eurosceptic ‘Patriots’ party and the former vice president of Marine Le Pen’s National Rally.

The French authorities told the media they expected between 17,000 and 27,000 people to take to the streets of the French capital alone. Yet, Paris was far from the only place in France to see massive rallies against the so-called health pass.

Between 2,000 and 2,500 protesters also gathered in the southern city of Marseille. Massive demonstrations were also held in Nice, Toulon and Lille. A large gathering was held in the eastern French town of Albertville where people were chanting: “We are here, even if Macron does not want us.”

Another small town of Valence with a population of just around 63,000 also saw thousands marching through its streets on Saturday.

A total of 200 rallies were scheduled for Saturday across France. The French authorities said they expected between 130,000 and 170,000 people to join the protests nationwide. The protests have been held for the eighth consecutive weekend in a row.

The rallies began in mid-July after President Emmanuel Macron’s government introduced a system that made presenting a vaccination certificate or negative Covid-19 test obligatory for those willing to visit a restaurant, theater, cinema and shopping mall or travel on a long-distance train.

The authorities maintain that the measure is needed to encourage people to get the jabs and eventually avoid another lockdown. Over 60% of French citizens have been fully vaccinated and 72% received at least one dose, according to Reuters.

Those who haven’t got the shot yet, or are not planning to at all, claim that the health pass diminishes their rights and turns them into second class citizens. Still, the introduction of the health pass is supported by at least 67% of the population, the French media report, citing a fresh poll conducted by Odoxa-Backbone Consulting for the French Le Figaro newspaper.