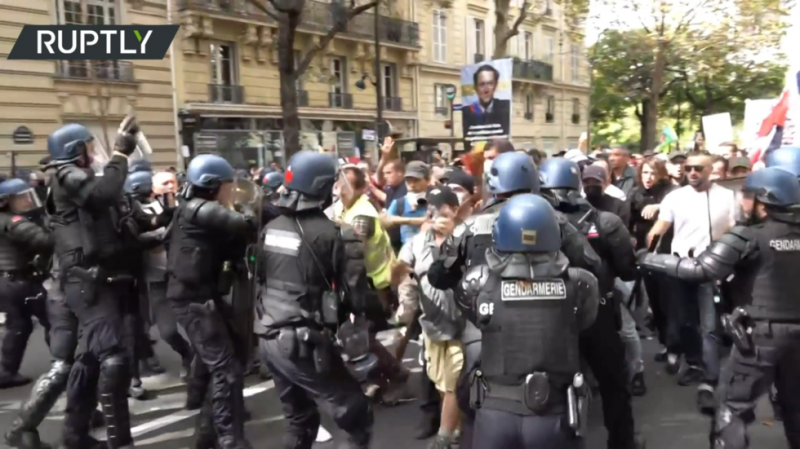 Four large-scale demonstrations were scheduled in Paris for Saturday. Crowds of people marched through the streets in various parts of the city, surrounded by tight cordons of police officers wearing riot gear.

The protesters were waving French national flags and holding placards that read: ‘health is not a business’. Some flags of leftist and even Royalist groups were seen in the crowds as well.

Large police forces were deployed in Paris, particularly at the Champs-Elysees and Wagram Avenue in the city’s northwest, where a large gathering was announced. The total number of demonstrators was unclear but the police said they expected around 30,000 to turn up on the streets of the city around midday.

Tensions quickly boiled over during the demonstrations as footage published on social media showed protesters kicking and verbally assaulting police officers on several occasions. Another video showed the crowd attacking the police with various objects. The police responded with tear gas and batons.

Clashes erupted near the Champs-Elysees in particular, as the police prevented participants of one of the demonstrations from entering the avenue, the French media reported.

Saturday was the ninth consecutive weekend of protests. Rallies began in mid-July after President Emmanuel Macron’s government introduced a system that made presenting a vaccination certificate or negative Covid-19 test obligatory for those wishing to visit a restaurant, theater, cinema and shopping mall or travel on a long-distance train.

The government measures also involved obligatory vaccination for medics, which was opposed by some hospital staff members. The government insisted that the measures are needed to encourage people to get the jabs and eventually avoid another lockdown.

Earlier, the French media reported that the health pass was supported by at least 67% of the population. Opposition to the measure remains significant nonetheless. Some 200 demonstrations against it were planned for Saturday across France. The police expect up to 170,000 people to join such rallies nationwide.

Last Saturday, some 140,000 people took part in the demonstrations, according to the French Interior Ministry.