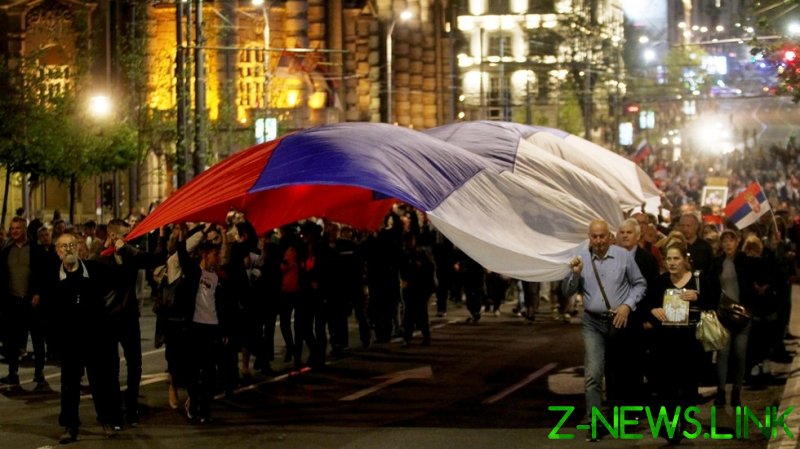 Several thousand Serbs gathered on Friday evening in downtown Belgrade, carrying Russian flags and declaring Serbia and Russia “brothers forever.” The rally, dubbed ‘Not in My Name’, protested last week’s vote of the Serbian envoy to the UN to suspend Russia from the Human Rights Council, which President Aleksandar Vucic said came only after immense pressure from the West.

Protesters gathered around 7pm local time at the monument to Nicholas II, the last Russian emperor, and marched through downtown Belgrade to the Russian embassy chanting, “Serbs and Russians – brothers forever!” and “Kosovo is Serbia, Crimea is Russia!”

Officially, the rally was in protest of last week’s vote at the UN General Assembly, when Serbia joined a total of 93 countries favoring Moscow’s suspension from the UN Human Rights Council. Russia subsequently left the panel. Vucic appeared on national television after the vote and said his government originally intended to abstain, but was then subjected to “countless and difficult pressure.”

Among the banners spotted at the rally by local and foreign correspondents were the flags of Donetsk and Lugansk – the two Donbass Republics that Moscow recognized as independent in February – as well as the St. Andrew’s Cross of Novorossiya and even the Russian Empire tricolor, though without USSR insignia.

Some of the demonstrators also carried signs with the slogan “No Surrender” and the outline of Kosovo, the Serbian province occupied by NATO in 1999 and declared an independent state in 2008 – something Belgrade has so far refused to recognize. 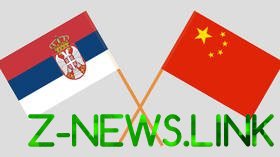 It was the second major rally in Belgrade in support of Russia since February, when Moscow sent troops into Ukraine with the stated aim to “demilitarize and denazify” the government in Kiev. Belgrade has officially remained neutral, declining to impose sanctions against Russia – but voting at the UN to condemn the Russian operation and call for the withdrawal of troops.

Serbia has since held a general election on April 3, in which Vucic’s SNS party ended up being the largest bloc in the parliament, but six seats short of a majority. Parliamentary parties are currently negotiating a post-electoral coalition that could form a cabinet.

One British-owned TV outlet cited anonymous sources to claim this week that the West expects a new government by August at the latest, and that its first act would be imposing sanctions against Russia. Meanwhile, liberal politician Dragan Djilas told the weekly Vreme that his party wants Serbia “in the West, not in the East” and that Belgrade would “have to show which part of the world it belongs to.”