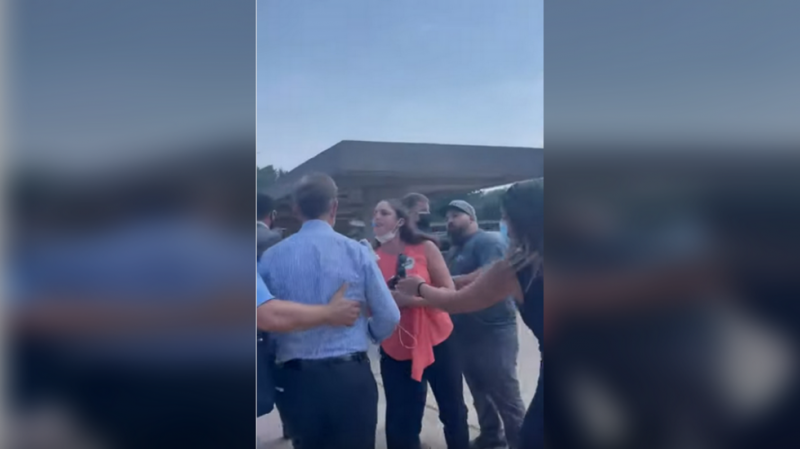 Connecticut Governor Ned Lamont had to be escorted away by security after he was surrounded by a group of protesters, fuming at his support for school mask mandates.

The heated standoff between the governor and the parents took place outside Highland Elementary School in Cheshire on Wednesday after he emerged from a mask roundtable, which had to be wrapped up early after protesters raised hell over the potential extension of a school mask mandate past September 30.

Footage from the meeting shows protesters chanting, “You are all criminals,” and waving anti-mask signs at the governor.

The protesters were allegedly part of the ‘Unmask Our Kids Connecticut’ campaign organized by the Connecticut Liberty Party, which styles itself as an “active grassroots organization… promoting the American ideals of Liberty, Freedom & Individual Rights” in the state.

On Twitter, the group denounced the roundtable as the “COVID mandate educator celebration” and noted that while they do not necessarily approve of the parents’ conduct towards the governor, “people need to stand up and speak out.”

“This ends when WE THE PEOPLE end it,” the group said.

The protest drew praise from the local Libertarian Party affiliate, while the state Democrats seized on the occasion to blame Republicans for not condemning the commotion immediately, although it’s unclear if the protesters were affiliated with any party.

While the Connecticut GOP seemingly distanced itself from the hecklers, noting that there was “no proof that these protesters were even Republicans,” it nonetheless backed their cause.

“Parents from all political affiliation disapprove of Ned Lamont’s actions to wrest control of their children and their children’s education away from them,” state GOP chairman Ben Proto said.

The governor’s office, for its part, dismissed the protest as an act of “bullying.” Lamont’s spokesperson, Max Reiss, doubled down on the governor’s defense of school mask mandates, insisting they are backed both by science and educators and help to protect young, unvaccinated children.