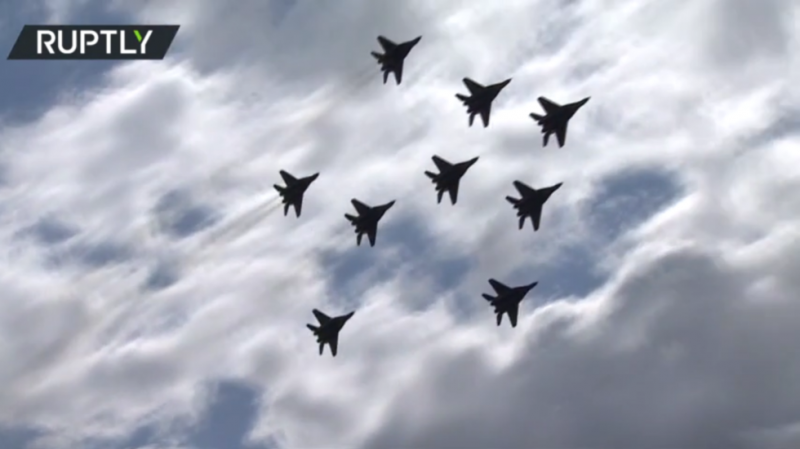 The nine MiG-29UB fighters of the Swifts team performed stunts while locked in a “diamond formation” above the Zhukovsky airfield near Moscow, where the air show is being held until July 25.

The aircraft, an upgraded version of the legendary Soviet workhorse, with blue swifts depicted on their underside, flew just meters away from each other while performing aerobatic maneuvers, including a complete loop and an aileron roll. The fighter jets were so close, they seemed to be glued together, and their ace pilots held the formation flawlessly.

Just like their fellow aerobatic team, the Russian Knights, which performed at MAKS-2021 on Saturday, the Swifts were flying regular war machines that haven’t undergone any specific modifications for aerobatics. They use a training version of the time-tested Soviet and Russian MiG-29 fighters.

And the team is about to get a long-awaited upgrade. On Friday, the group’s commander, Colonel Sergey Osyaikin confirmed it would receive its first multipurpose MiG-35 fighter jet later this year, and it’s expected that it’ll take delivery of nine new jets in total. The state-of-the-art fighter, which boasts vastly improved avionics in comparison to the original MiG-29, was showcased at MAKS-2021 in a solo flight.

The Swifts are world renowned and frequently perform at air shows and army expos in Russia as well as at various events abroad, including in France, Sweden, Germany, and the US. They marked their 30th anniversary earlier this year.