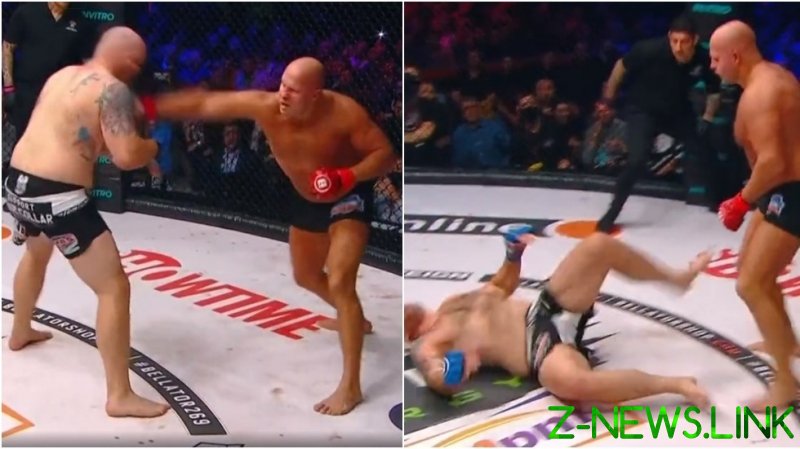 Part of the talk leading up to Saturday’s fight at VTB Arena in the Russian capital had focused on whether this would be the last time Emelianenko fights in his homeland – and possibly ever.

But in the end, the 45-year-old veteran scored a stunning KO victory over number two-ranked Bellator heavyweight Johnson, catching him with a perfectly timed salvo of punches in the first round to lay the American out on his back as the contest was waved off and the home crowd erupted.

Remarkably, it was a 40th career win for Emelianenko and could now push him into potential talk of a Bellator title fight in what might be his retirement bout.

Considered by many as the greatest ever to do it at heavyweight, Emelianenko was making a return to the cage for the first time since December 2019, when he finished Quinton ‘Rampage’ Jackson in the first round of their bout at Bellator 237 in Japan.

That was seen as one stage on Emelianenko’s retirement tour, with another coming in Moscow on Saturday night as the Russian icon fought on home soil for the first time in five years.

Many felt ‘The Last Emperor’ had selected a tough opponent in the form of the 36-year-old Johnson, who was coming off a unanimous decision defeat to Valentin Moldavsky in an interim heavyweight title fight at Bellator 261 in June, following a three-fight winning streak.

But Emelianenko showed he still had dynamite in his hands, catching Johnson with a perfect three-punch salvo to flatten the American inside the first two minutes and send the home crowd wild.

Emelianenko extended his incredible career record to 40-6 with one no-contest, and with one fight left on his current Bellator contract, the Russian heavyweight legend could be looking at a big swansong in the US or Japan, or possibly even on home soil again.

“The performance he had was unbelievable. Tim’s a tough guy, I don’t think I’ve ever seen Tim get knocked out like that… my jaw dropped,” said Bellator chief Scott Coker of Emelianenko’s performance.

“That’s up to him [regarding his retirement], personally I think he wants to continue. But let’s say he wants to retire, this would be the perfect night,” said Coker of whether Emelianenko would carry on.

“He’s already done it all, everything in MMA.”

Speaking to the media at his own post-fight press conference, Emelianenko said he would sit down and talk over his future with Coker, but suggested he was keen on at least one more fight – potentially in Russia, and potentially with Bellator gold on the line.