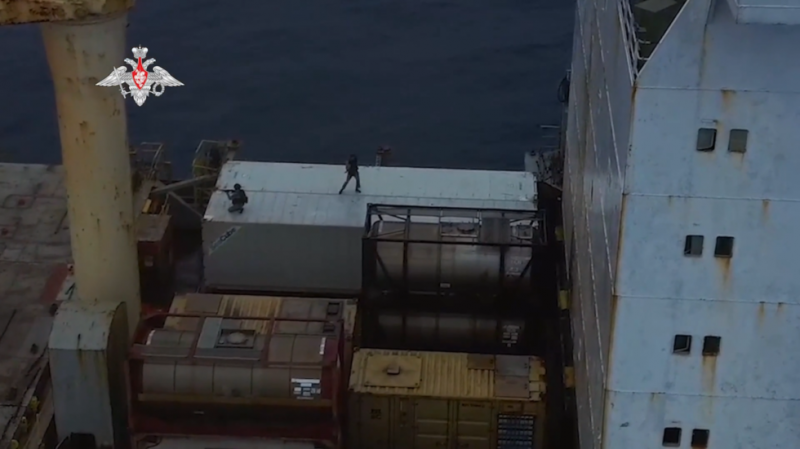 In the clip released on Tuesday by military officials, an anti-terror unit from the Russian Navy’s Vice-Admiral Kulakov warship can be seen climbing on board the massive vessel, scrambling shipping containers with weapons at the ready, then ascending the stairs to the control room, searching for any remaining intruders aboard the boat.

Earlier, it was reported that MSC Lucia, heading to Togo in West Africa, sent out a distress call on Monday at around 1pm, signaling that the ship had been boarded by armed pirates about 86 nautical miles southwest of the Agbami Terminal on the Nigerian coast.

The Udaloy-class destroyer arrived in the Gulf of Guinea around a fortnight ago, carrying out naval security operations and a three-week anti-piracy patrol in the region. It has already prevented the seizure of another Panama-flagged vessel, naval sources say.

Russian forces were scrambled to respond after the Lucia’s crew reported that pirates had boarded, taking refuge in the engine room. After the distress message, a Ka-27PS helicopter was dispatched with the anti-terror unit on board.

Seeing the approaching military helicopter, “the pirates left the ship, got into a fast boat and headed towards the coast at full speed,” the Russian Defense Ministry said in a statement. The Kulakov’s forces then boarded the cargo ship and investigated the vessel to ensure the boat was secure.