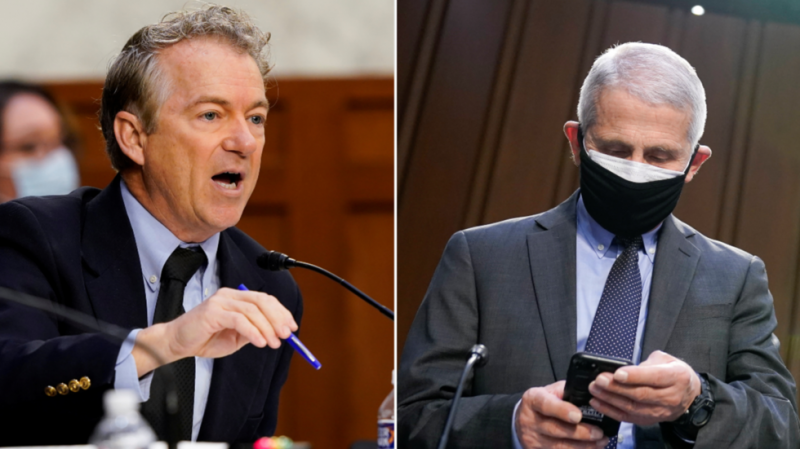 The Kentucky senator demanded Fauci explain why Americans who’d already been sick with Covid-19 and recovered, or received the vaccine should be “wearing masks well into 2022” during a Senate hearing on Thursday. Insisting there “no scientific studies arguing or proving that infection with Covid does not create immunity,” Paul demanded the doctor cite “specific studies” to bolster his claims that “everyone” should wear a mask (or two masks, as Fauci’s trend-setting television appearances have encouraged).

“If [recovered and vaccinated people are] not spreading the infection, isn’t [wearing a mask] just theatre?” the senator queried, arguing that as of last fall, just five of the 38 million confirmed cases of the virus were believed to be reinfections.

After an uneasy pause, Fauci dismissed the notion that vaccinated people double-masking was just for show, arguing even vaccinated Americans would be helpless in the face of a South African Covid-19 variant that has recently emerged. However, while the South African variant has shown itself to be more resistant to the AstraZeneca vaccine, individuals vaccinated with the Moderna or Pfizer-BioNTech jabs appear to retain whatever benefits they would otherwise have received from the shots.

As Fauci attempted to talk up the ferocity of the South African variant, which has not been shown to be any more infectious or harmful to the patient than any of the other viral variants, Paul accused him of making policy based on conjecture – all but suggesting that new strains would slip into the country and begin infecting helpless vaccinated Americans willy-nilly, undoing all the hard work the government’s vaccination campaign had accomplished and returning Americans to square one if they didn’t wear their masks.

Such a claim would seem to run contrary to the US government line suggesting Americans should get vaccinated as soon as humanly possible, an issue Paul took care to point out. “You want to get rid of vaccine hesitancy? Tell them they can quit wearing their mask after they get the vaccine!” he explained.

Paul was infected with the virus a year ago and has argued he is now immune, pointing to the almost nonexistent rate of reinfection among those recovered from the virus. Fauci received the Moderna vaccine in January. While he has become a vehement defender of face coverings, the Biden administration’s top health advisor initially urged Americans not to wear them, suggesting last February that the protection they offered was largely illusory and urging ordinary people to leave them on the shelves so that they would be available for the healthcare workers who needed them.