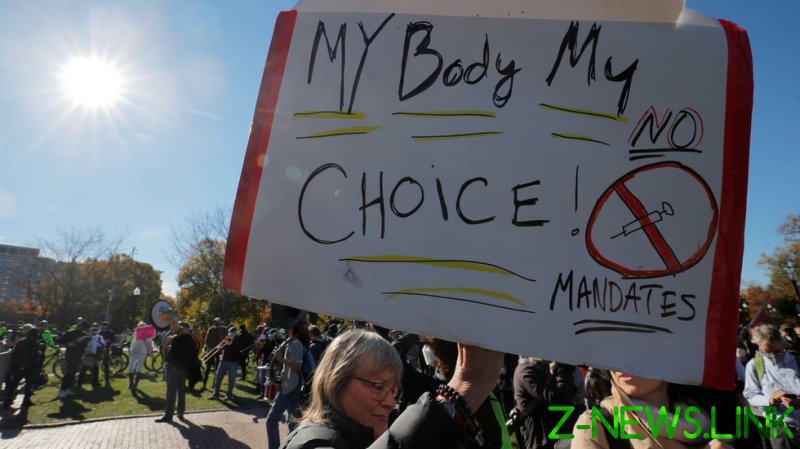 Organizers behind the main protest – dubbed Rise Against Tyranny –  said they were demonstrating against “vaccine passports, face diapers, mass layoffs, and unconstitutional mandates.” Counter-protesters, however, tried to drown out the anti-mask crowd trying to play music at the event through speakers or with a full brass band in attendance.

As tensions flared up between the groups, scuffles erupted. Numerous demonstrators were seen exchanging blows and taking down barriers, prompting police in full riot gear to step in in a bid to end the melee.

At one point, counterprotesters appeared to have damaged a van allegedly driven by anti-mandate activists. Chants of “Nazis out!” can be heard in the video as protesters are banging on the vehicle. Two people were eventually arrested over the clashes, a Boston police officer told Fox News.

Police had previously closed streets in the Boston Common in anticipation of the protest, which was put on by a group called Super Happy Fun America. Left-wing activist groups, such as “Solidarity Against Hate – Boston” and “Green Monster Antifa”,  had posted about the protest ahead of time and said they wanted to get  those opposing the mandates “the hell out of town”