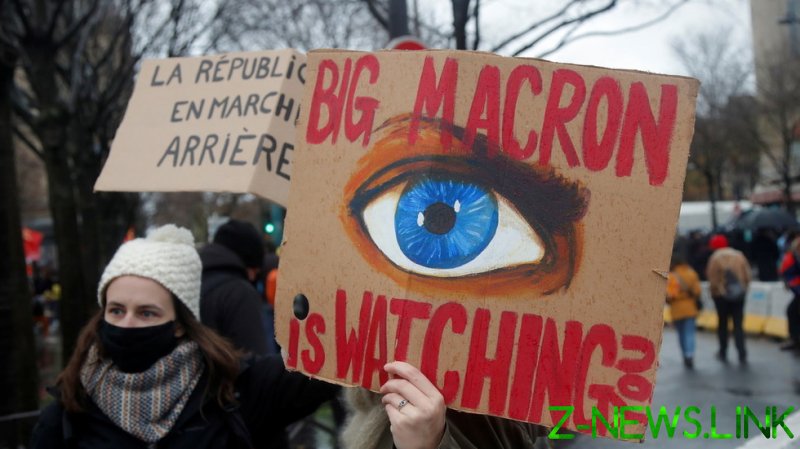 The officers were seen demonstrating in the streets of Paris on Monday night in footage captured by RT’s video agency, Ruptly, some protesting in uniforms and from emergency vehicles, their flashing blue lights illuminating the city’s iconic Place de l’Etoile.

“I speak on behalf of the colleagues who are behind me, who suffer every day outside, who are molested, burned, abused, harassed,” one officer told Ruptly, demanding that police receive “support” from the government.

The protest comes as Macron increasingly takes aim at French policing, vowing to “personally intervene” in the matter earlier this month after a pair of controversial video clips emerged showing officers beating up suspects. In a letter to a national police union last week, the president vowed a series of reforms in seven areas, including police training, supervision, resources, video footage of interventions, inspections, and relations with the wider population.

Macron’s party, La Republique En Marche, has also drawn the ire of law enforcement after it pledged to partially rewrite a controversial security bill, one provision of which bars citizens from filming on-duty officers and posting the images online with “intent to harm.” Critics of the bill, which was recently adopted by the lower house of parliament, have staged their own protests over the measure for three consecutive weeks, some arguing it could criminalize journalists seeking to document police brutality.

Monday night’s police protest is not the first of its kind in the French capital in recent days, with officers staging another demonstration last Friday. According to a local journalist, the previous protest came after Macron gave an extended interview to French video platform Brut, where he said non-whites are “more likely to get checked by the police,” among other criticisms of law enforcement during the two-hour-plus sit-down.