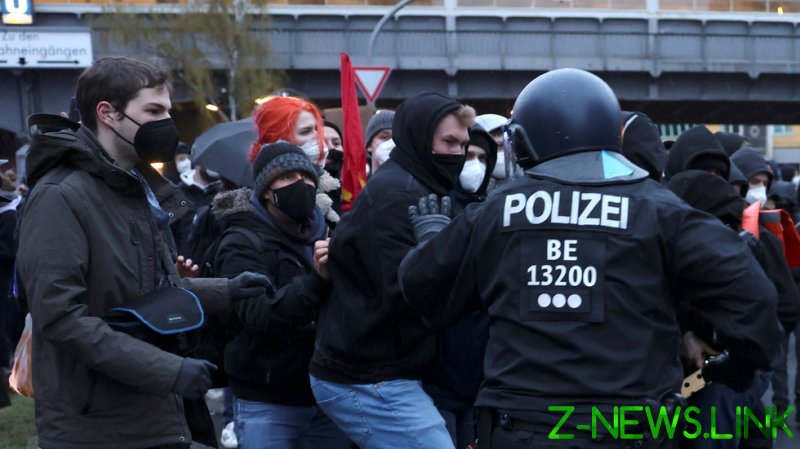 As many as 10,000 people took to the city’s streets on Thursday, local paper Berliner Zeitung reported, with many banging pan lids as a form of noisy protest and call of attention.

But the largely peaceful demonstrations later turned violent as crowds converged on an area near the Hermannplatz metro station in the center of the capital, where some scuffled with police.

Protesters then marched down Kottbusser street, where they were greeted by officers in riot gear and tussles broke out after they were reportedly asked to clear the area.

Footage posted to social media showed protesters angrily confronting police who shoved them back. Several arrests were made.

Another video showed one person start hitting police as he came towards a line of officers and armoured vehicles, while other footage showed cops manhandling a protester and punching him to the ground.

Some people reportedly threw bottles at police, who used pepper spray in a bid to control the crowds, according to Der Tagesspiegel. A journalist was also reportedly injured in the fracas.

The protests come after years of debate over Berlin’s rent cap, which meant 90% of the city’s apartments remained at their June 2019 level for five years. In November, the state government threatened landlords with fines if they did not reduce excessively high rents in accordance with the freeze, which came into force in February 2020.

The move was designed to combat Berlin’s surging rents, which according to the German Property Foundation (ZIA) increased 27% from 2013 to 2019. However, on Thursday the rent freeze was declared null and void by constitutional judges who said the state law encroached on federal legislation.