WATCH: Partially collapsed Florida condo comes down in controlled blast as search for 121 missing to resume 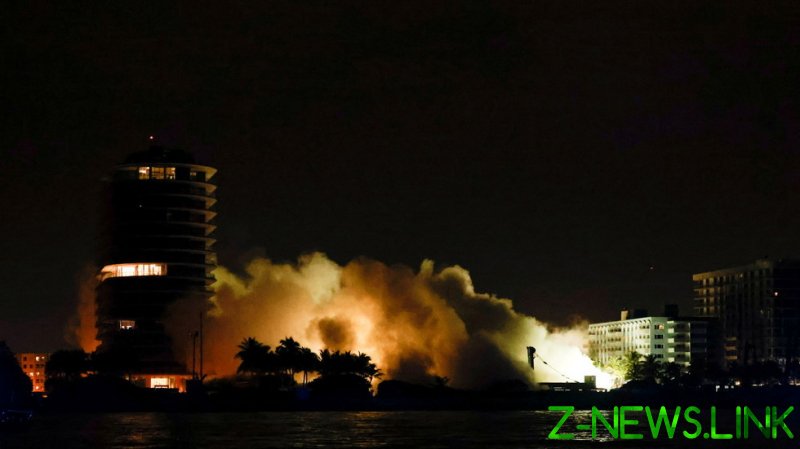 The rest of the 12-story Surfside residential complex was brought down on Sunday. The demolition will allow rescuers and emergency workers to resume combing through debris in the hope of finding survivors or recovering victims’ bodies.

The search was put on hold on Saturday amid mounting concerns that the remains of the structure might collapse, putting emergency workers at risk. The concerns had been exacerbated by Tropical Storm Elsa, set to reach southwest Florida on Tuesday or Wednesday and bring torrential rains and strong winds to the site.

Footage of the demolition shared on social media shows the towering structure vanishing into a thick cloud of dust in a matter of seconds to the audible gasps of the public gathered outside the security perimeter.

Police urged citizens to stay inside, issuing “shelter in place” orders as officials warned about air pollution from debris and concrete dust.

The demolition coincided with the nationwide July 4 celebration that was, however, toned down in Miami Beach. The city canceled its annuel Fire on the Fourth fireworks and urged the residents to light a candle in honor of all the victims of the Surfside tragedy instead.

So far, 24 people have been confirmed dead in the collapse, and 121 remain unaccounted for. While an investigation into the cause of the tragedy is still ongoing, officials suggested that a lack of necessary repairs and inspections is to blame. A 2018 engineering report indicated that there was a serious flaw in the condo’s design that may lead to the erosion of the concrete.

In the wake of the Surfside incident, the authorities ordered an audit of other potentially unsafe buildings in the area. That led to the evacuation of another condominium in Miami Beach on Friday. Crestview Towers in North Miami Beach, built in 1972, was evacuated after a January engineering report deeming the structure unsafe came to light.