Home / WORLD / Watch out, ref: Cristiano Ronaldo bags for Juventus against Roma – then grabs for official’s arm as he asks to check goal (VIDEO)

Watch out, ref: Cristiano Ronaldo bags for Juventus against Roma – then grabs for official’s arm as he asks to check goal (VIDEO) 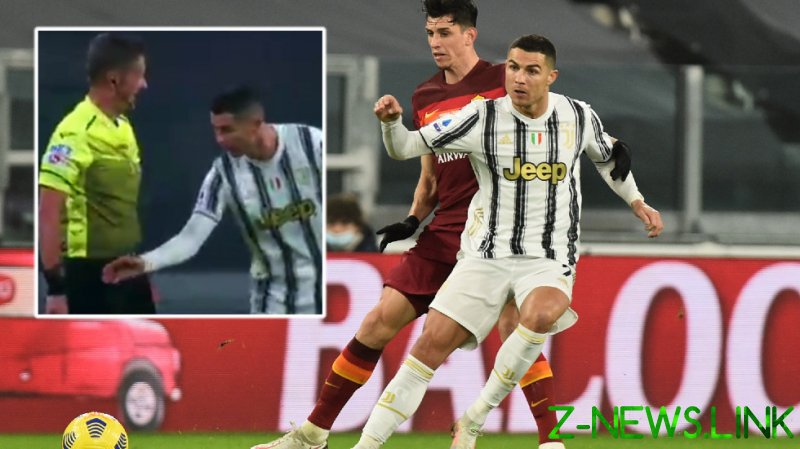 The striker, who was spotted wearing an 18-karat white gold Rolex worth around $510,000 at an awards ceremony in June, asked official Daniele Orsato whether his effort had gone in after nearly netting in the home game on Saturday evening.

When Orsato assured him that the sensor on his decidedly less expensive device had not gone off to indicate a goal, disbelieving Ronaldo insistently reached towards the watch as the adjudicator played along by laughing.

The Serie A top scorer had already added to his haul for the season, breaking the deadlock in the 13th minute to give Juve the lead.

The goal was Ronaldo’s third of the week after he scored twice against scudetto rivals Inter Milan in the Coppa Italia on Tuesday to ensure his side came back from a goal down to win 2-1 in the first leg of the semifinal.

His precise early finish was the ideal way for the irrepressible forward to celebrate his first match as a 36-year-old, having spent part of his birthday in the snow in Turin with girlfriend Georgina Rodriguez on Friday.

Aside from Ronaldo’s moments of brilliance – the Portugal captain later had a shot saved by Spain stopper Pau Lopez in goal for the visitors – Juventus fans might have been nervously clock-watching for much of the first half.

Starting the game above Juve in third, Roma dominated passages of the opening 45 minutes and had the better of the overall possession.

That counted for little when the unfortunate Ibanez scored an own-goal after 69 minutes, doubling the advantage provided to Juventus by Ronaldo’s 300th goal since he turned 30.

The reigning champions held on for an important win, sending them above Roma and five points shy of leaders Inter with a game in hand.