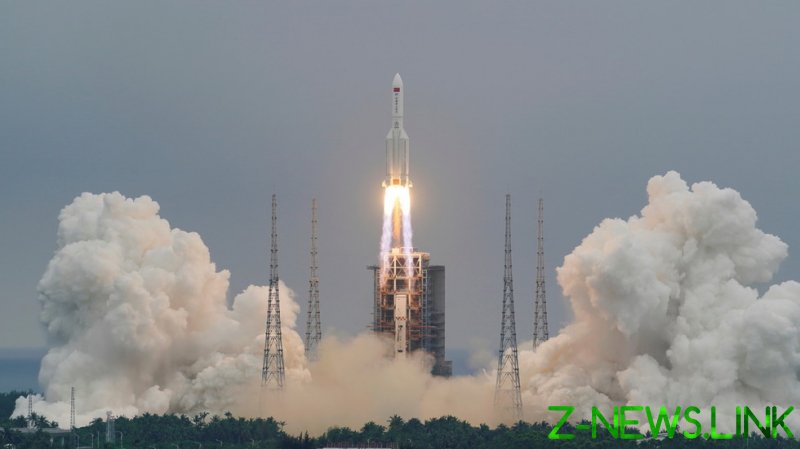 Roscosmos director Dmitry Rogozin tweeted out a map of the possible area of impact, anywhere up to 41 degrees north and south of the equator. The errant booster will re-enter the Earth’s atmosphere on May 8 at the earliest, Roscosmos said, citing current tracking information and preliminary calculations.

The Long March 5B was used to launch the first module of China’s first-ever space station, into low-Earth orbit last week. While it successfully detached from the payload, it did not maneuver into a safe de-orbiting path for a controlled re-entry, and has been tumbling down toward the Earth ever since.

“This is probably among the top 10 largest objects to come down in one piece,” Ted Muelhaupt, a space debris expert at the US-based nonprofit Aerospace Corporation, told Australia’s ABC. The 30-meter (100-foot) rocket weighs more than 22 tons.

Roscosmos said that “part of the [booster] will cease to exist in the dense layers of the atmosphere,” but “individual non-combustible structural elements can reach the Earth’s surface.”

The Pentagon said the US Space Command was “tracking” the expended rocket, but there were no plans to shoot it down at this time.

As the rocket is moving at an average speed of seven kilometers per second, it’s very difficult to predict where it might hit. It will be possible to narrow down its impact area to within a hemisphere from “a few hours out,” Muelhaupt said.

Aerospace Corporation has published its own map of the potential impact zone – which matches that provided by Roscosmos – overlaid onto a satellite image of the planet’s surface, along with the likely re-entry tracks.

Their estimates put the rocket’s re-entry at around 2:30 in the morning GMT on May 9, plus/minus 21 hours.

Long March (Chang Zheng) 5B is reportedly the world’s third most powerful orbital launch vehicle, after the US Falcon Heavy and Delta IV Heavy. Last week’s launch saw it deliver the first module of China’s first-ever space station, dubbed Tianhe – ‘Harmony of the Heavens’ – into orbit. Future launches are supposed to deliver two smaller modules, dubbed Wentian (‘Quest for the Heavens’) and Mengtian (‘Dreaming of the Heavens’).