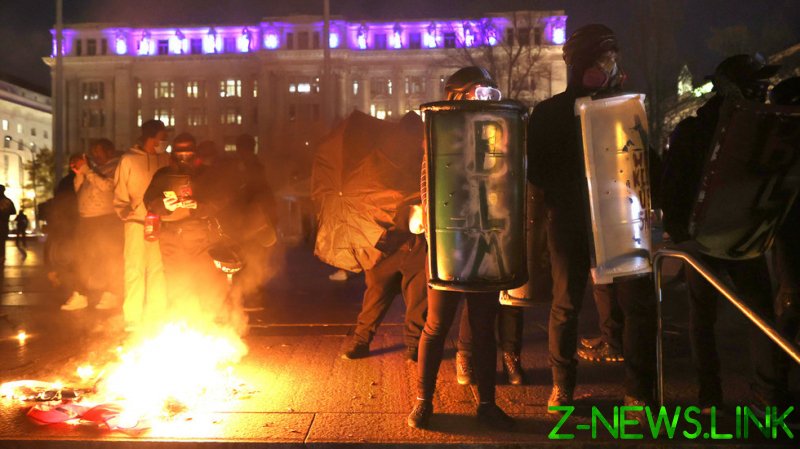 READ MORE: Scuffles in Washington as thousands of Trump supporters face off against counter-protesters (VIDEOS)

The Saturday’s event, dubbed the #MillionMAGAMarch and attended by thousands of people, passed relatively peacefully, only marred by sporadic scuffles between more radical right-wing Proud Boys and leftist Antifa that were swiftly quelled by DC police.

However, as the pro-Trump event winded down and MAGA supporters started to disperse later in the day, the ‘counter-protesters’ turned increasingly violent, and were seen chasing, attacking and harassing lone activists as police apparently struggled to respond to multiple incidents happening all at once.

Another group of ‘peaceful’ counter-protesters allegedly ransacked a stand with MAGA merchandise and were seen torching a pile of hats and flags in the vicinity of the so-called BLM Plaza.

Several other videos showed conservative activists trying to walk away as mobs follow them, intimidating and dousing Trump supporters with unknown liquids.

While police were present in the streets in big numbers, witnesses decried their slow response to the volatile situation.

One of the Trump supporters was brutally knocked down from behind and repeatedly kicked while lying on the asphalt – but in that case at least police reportedly arrested the perpetrators.

Besides larger groups harassing individuals, there were also clashes between more equal opponents. Following their clashes earlier in the day, an “all out brawl” between Proud Boys and Antifa was reported, with the opposing sides throwing projectiles, and using shields, sticks and batons in a “full melee” in the streets of DC on Saturday evening.