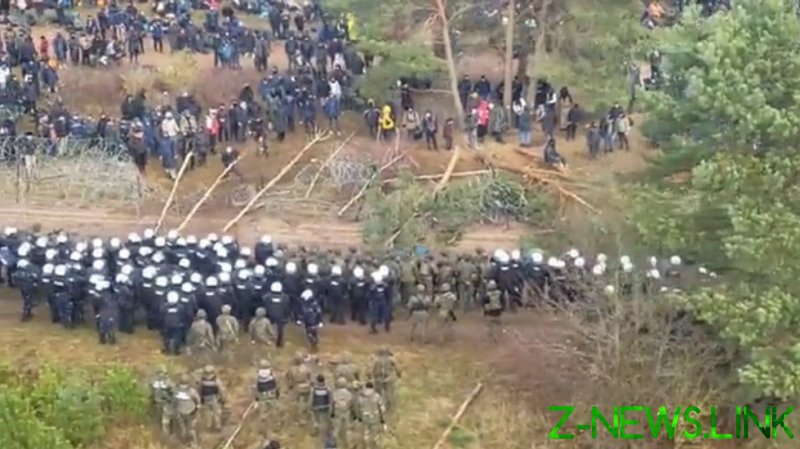 “We are dealing with organised destruction of border fortifications,” the Polish prime minister’s office tweeted on Monday afternoon, along with aerial footage of the Poland-Belarus border. “There are also direct attacks on Polish Border Guards officers, police and soldiers.”

Hundreds of migrants have camped along the border, seeking to enter Poland and request asylum in the EU. The video shows some of them using felled trees to bridge the ditch along the frontier and breach the barbed-wire fence, as Polish police and border guards line up on the other side.

Some 12,000 Polish troops have reportedly been posted to the border to stop what Warsaw has called a “hybrid attack” by Belarus. The government in Minsk said back in June that EU sanctions against Belarus were a form of hybrid warfare and that it would no longer prevent third-country migrants from trying to cross.

Poland has reached out both to Brussels and NATO, describing the border situation as an invasion. President Andrzej Duda tweeted on Monday that he held talks with presidents of Lithuania, Latvia, Estonia – but also Ukraine and Georgia – all former Soviet republics, just like Belarus, thanking them for their “full support and understanding.”

“By defending our borders, we [Poles] defend Europe,” Duda said.

He also thanked “leader of democratic Belarus” Svetlana Tikhanovskaya, the opposition activist who sought refuge in Lithuania after last year’s presidential election, which she claimed was “stolen” by President Alexander Lukashenko.