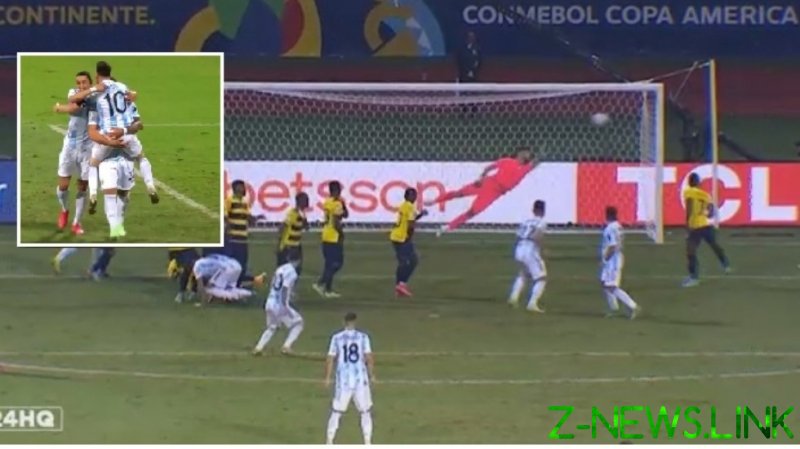 Looking to at least match their performance at the last edition of the competition by advancing to the last four, Lionel Scaloni’s men depended on a world-class performance from their captain and talisman.

The number 10 didn’t disappoint, although it took almost the full first half to break the deadlock.

In his team’s first big chance of note, he hit the post when chesting a long ball down and heading through on goal.

On 40 minutes, however, Messi found Atletico Madrid target Rodrigo de Paul when the ball broke loose, as Lautaro Martinez was confronted on the edge of the box by goalkeeper Hernan Galindez.

Without even raising his head, he laid off a swerving no-look pass to Paul that was smashed home into the corner.

In the second half, a similar turn of events saw Messi capitalize when Angel Di Maria robbed the ball from a dawdling defender.

Playing a lovely dink with the outside of his foot that rolled perfectly into the Inter Milan striker’s path, Martinez made it 2-0 with a thunderous shot into the top locker.

But the iconic number 10 wasn’t done there.

In stoppage time, he tied generational rival Cristiano Ronaldo by bagging his 58th direct free kick for club and country, and is now just one shy of Pele for the most goals by a male international footballer from South America on 76.

With a tally of four goals and four assists at the competition, the 34-year-old is in the form of his life and hungrier than ever for his first major international trophy for Argentina after falling short at the final hurdle three times in the continent’s flagship spectacle and once at the World Cup on Brazilian soil in 2014.

“Individual achievements are secondary,” stressed Messi of his latest feats post-match, while congratulating his teammates “for the work they are doing”.

“We have been far from our homes for a long time, we were the only team that never broke the bubble,” he pointed out.

“It was a very tough match,” Messi went on.

“We knew of Ecuador’s difficulty. This was one of the big objectives: to be among the [last] four.”

“Now he will play a tough opponent. We will be calm and think about Colombia. We have to go step by step and hopefully we can reach that precious end,” he concluded, while later posting a photo to his Instagram account with the caption “One step closer to the objective”.

As mentioned, it is Colombia who Argentina will face after heartbreak for Messi’s close friend Luis Suarez from 12 yards out.

After a 0-0 scoreline through regular and extra time, David Ospina was the hero for Los Cafeteros as he saved spot kicks from Jose Maria Gimenez and Matias Vina.

Colombia prevailed 4-2 in the shootout, to exorcise demons from three years ago to the day, which is when they lost 4-3 to England at the World Cup last 16 in Moscow in identical fashion.

And when the two outfits meet in the early hours of Wednesday morning, Argentina will hope to do better than the 2-2 draw between the two sides in a Qatar 2022 qualifier a month ago, where they were two up inside eight minutes but squandered their lead in the second half.

Before that, they lost 2-0 to their semi-final foes at the 2019 edition of this competition during the group phases.

But whoever is victorious, they will take on holders Brazil or last runners-up Peru at the Maracana on Saturday.