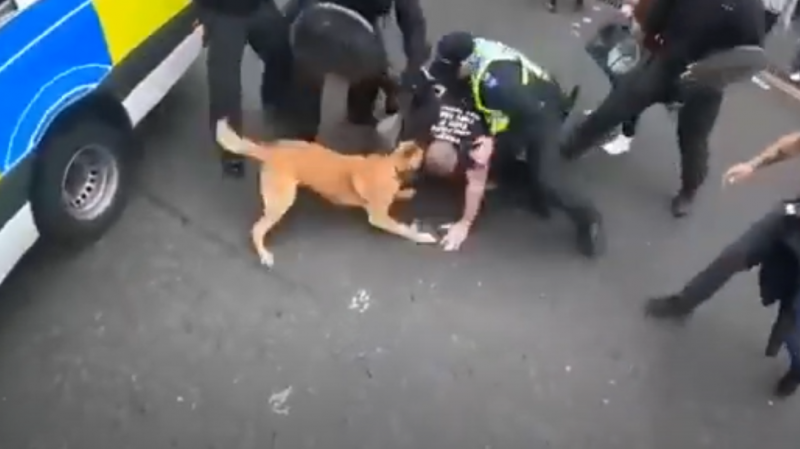 Footage posted on social media from Sunday’s protest shows a police dog biting a man near the base of his neck while he’s being taken to the ground and arrested by at least three officers. In the video, the canine continued to maul the man for about 15 seconds, until another officer finally pulled the dog off the prone suspect. A woman standing near the scene pointed at the dog and repeatedly screamed at police to get the animal off the man.

Ironically, the brutal scene played out in front of a police van with the words “proud to protect” on the side. It’s not clear what transpired prior to the arrest and the dramatic scene captured on camera. The suspect is seen at the beginning of the video running down the street towards Newcastle’s St Mary’s Place before being confronted by police and tackled from behind by an officer in riot gear.

Some observers said the man had been among a group of protesters who were “kettled” by police and escaped. Others speculated that he must have done something deserving of such violent treatment.

Northumbria Police told Newcastle’s Chronicle newspaper that 12 arrests were made at Sunday’s protest because of the “violent behaviour of some of the individuals taking part.” Superintendent Steve Wykes didn’t comment specifically on the arrest of the man mauled by the police dog, but he said the large law enforcement presence was needed to “deliver a proportionate policing response to the protest activity.”

“An extremely challenging day,” Wykes later added on Twitter. “My thanks to staff, who I asked a lot of during this dynamic operation and also to the public for their support while we sought to minimise disruption. Peaceful protest will always be supported. Violence will not be tolerated.”

An estimated 300 protesters participated in the demonstration, which was near the city’s civic center, and planned to march through the city, the Chronicle said. Hundreds of police with riot gear, dogs and horses flooded the area, creating blockades on both sides of the protesters.

Clashes with protesters ensued, with demonstrators being hit with batons and, in some cases, pinned to the ground and dragged away. Twitter user Clare Davidson said she also witnessed police violently pushing a woman who was holding a child.

One of the horse-mounted riot officers stirred outrage by apparently taunting protesters with his baton as they passed and chanted, “Shame on you, shame on you!” The same officer was purportedly seen in another clip riding his horse into a group of protesters pinned against a wall and swinging his baton, as people in the crowd yelled at him and called him a “nasty Nazi!”