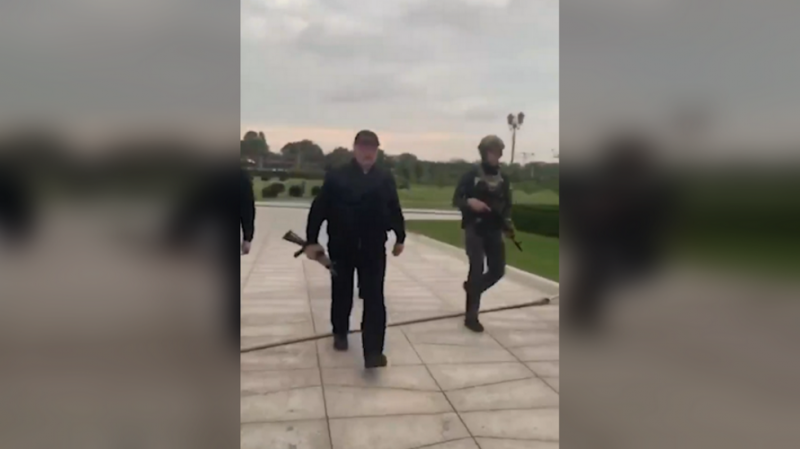 The bizarre footage, posted by a Telegram channel close to Lukashenko’s press service, shows the President dressed in a tactical vest and carrying an AK assault rifle. It appears that Lukashenko – in power for 26 years – is channelling Salvador Allende, the former Chilean President deposed in a 1973 CIA-backed coup.

In one video, Lukashenko is seen flying over Minsk while speaking to the pilot on a phone. He then disembarks from the chopper, accompanied by a young man who resembles his 15-year-old son, Nikolay (better known as ‘Kolya’).

Several other armed men can be seen in another video, which shows Lukashenko casually strolling toward his residence with the gun in his hand. He asks them, “There isn’t anybody out there, is there?”

The footage from inside the helicopter shows the president ordering the pilot to fly closer to a street, apparently to have a better look at the anti-government protesters below. Lukashenko’s weapon can be seen resting by his side during the flight.

While aboard the helicopter, the president can be heard saying “they’ve run like rats,” presumably referring to the protesters on the ground.

Earlier in the evening, protesters came close to Lukashenko’s residence chanting the slogan “Go Away!” They were met by OMON riot police and turned back to the center of the city some time later.

At one point, a helicopter was seen flying over the protesters. Some, on social media, claimed Lukashenko was fleeing the city, but it now seems the opposite was the case.

Belarus has seen a wave of mass anti-government protests, triggered by the results of the August 9 presidential election, which the opposition believes was falsified. While Lukashenko received more than 80 percent of the votes according to official figures, his critics accuse him of rigging the vote. The crisis has sparked mass demonstrations and strikes across the country in recent weeks.

The election result has been also challenged by several Western countries including the United States and the collective European Union, which has refused to accept the outcome and has supported the protests.