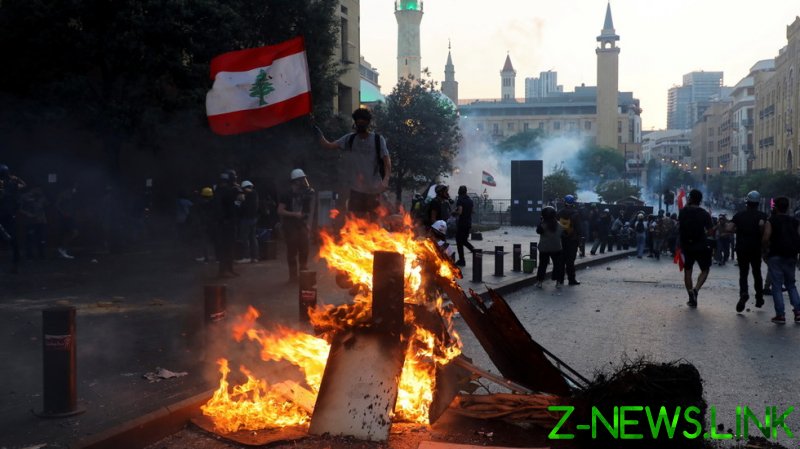 Hundreds of protesters – some wearing respirators and helmets – set fire to barricades in the streets outside the Lebanese parliament and clashed with police on Wednesday evening. Green lasers could also be seen cutting through the smoke.

Video from Beirut shows smoke and crowd control ammunition being used against the demonstrators.

Dozens of people were injured in the riot. The Lebanese Red Cross said 45 people were treated at the scene, while another nine were transported to area hospitals.

The evening’s protest was the culmination of mass demonstrations in Beirut, with tens of thousands of Lebanese marching to commemorate the August 4, 2020 blast that wrecked the port and destroyed much of the city.

Some 218 people were killed by the explosion, one of the largest non-nuclear blasts in history, while more than 7,500 were injured. It was later established that the blast originated at a warehouse storing some 2,750 tons of ammonium nitrate, a highly explosive compound widely used in fertilizers and bombs. The cargo had been seized from a ship and had sat in the warehouse for six years before the disaster.

Chants by demonstrators on Wednesday called Lebanese politicians corrupt, criminals and terrorists, while demanding accountability for the August 4, 2020 explosion and an end to impunity. Some vowed “revenge until the regime falls,” according to one reporter.

Complicating the efforts to get justice is the fact that Lebanon hasn’t had a proper government since the blast. Prime Minister Hassan Diab resigned after the port explosion, but remained in caretaker capacity until a new cabinet could be formed. The Lebanese constitution requires the PM to be a Sunni Muslim, but the country’s political parties have been unable to put together a viable coalition.

Meanwhile, the Lebanese pound has lost more than 90% of its value, leading to widespread economic hardship.