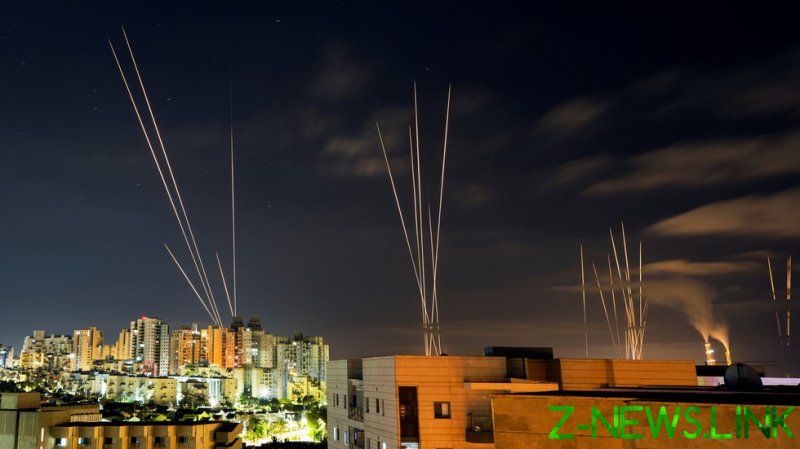 At least three rounds of rockets were fired from Gaza in the direction of Tel Aviv and other parts of central Israel on Saturday night, according to RT’s Paula Slier.

Multiple videos shared on social media showed the night skies light up with both rockets coming out of Gaza and the Iron Dome missiles launched to intercept them.

There were no immediate reports of casualties from rocket impacts, but at least 10 people received injuries while rushing for shelters, according to Israel’s national EMS.

Hamas has justified its renewed strikes against Israel as a retaliation for the “massacre of women and children at the Shati refugee camp” the night before.

The midnight strikes came shortly after Prime Minister Benjamin Netanyahu delivered a speech vowing that Israel will continue to strike Gaza “as long as necessary.”

“The party that bears the guilt for this confrontation is not us, it’s those attacking us,” he added. “Unlike Hamas, which deliberately intends to harm civilians while hiding behind civilians, we are doing everything… to avoid or limit as much as possible harming civilians and to directly strike terrorists instead.”

Earlier on Saturday, IDF destroyed a building where offices of international media outlets, including Associated Press and Al Jazeera, were located – claiming it to be a legitimate military target because it allegedly housed “Hamas military intelligence.”

The nearly week-long violent standoff between Israel and Palestinian militants was initially prompted by an Israeli court decision to evict several Palestinian families from an East Jerusalem neighborhood, which led to massive protests and brutal police crackdown on the demonstrators. In retaliation, Hamas militant group targeted Israeli cities with rockets on Monday, prompting Israel to launch its massive military operation against ‘terrorist infrastructure’ in Gaza.

The hostilities so far claimed at least 145 Palestinian lives, including 41 children, while Israel reported 10 dead, including two children, with hundreds injured on both sides.