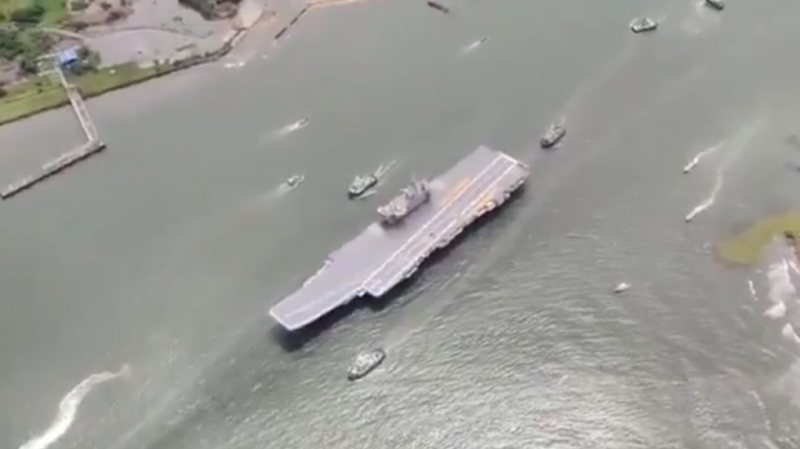 On Wednesday, the Twitter account for the Indian Navy shared a video of the 262-meter aircraft carrier, dubbed Indigenous Aircraft Carrier 1 (IAC-1), heading to sea for trials.

The navy said that many more sister ships were to come, hailing the “historic and proud day” for the country. It adds that the IAC-1 is taking to the waters for its maiden sea trials 50 years after its soon-to-be predecessor played a pivotal role in securing victory in the 1971 Indo-Pakistani war.
The vessel will eventually be named INS Vikrant, meaning ‘stepping beyond’, once commissioned, after its predecessor.

Defense Minister Rajnath Singh said the maiden voyage of the 40,000-ton warship was “a true testimony to our unwavering commitment to #Atmanirbharta in Defence.” Labeling it “a proud moment for India,” he added that the “Realisation of this historic milestone, regardless of Covid, shows true dedication & commitment of all stakeholders.”

The IAC-1 will host a range of fixed and rotary wing aircraft, including the MiG-29K fighter aircraft and Kamov-31 Air Early Warning Helicopters, according to the navy.

Indian media cites plans to commission the warship in 2022, when it would become the second aircraft carrier in the country’s fleet. The only aircraft carrier currently in use is the Russian-made INS Vikramaditya.

India has been pushing for self-reliance in several industries for many years; defense being a key sector. The government has also pushed forward with plans for self-reliance in the medical sphere during the Covid-19 pandemic. The well-used Hindi phrase ‘Atmanirbhar Bharat’ roughly translates as ‘self-reliant India’.